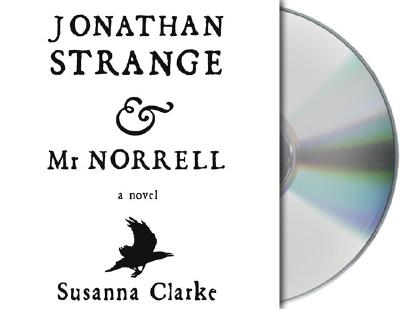 By Susanna Clarke, Simon Prebble (Read by)
$59.95
OUT-OF-PRINT & UNAVAILABLE! (But email us to search for a used copy.)

The national bestseller is now available on audio
English magicians were once the wonder of the known world, with fairy servants at their beck and call; they could command winds, mountains, and woods. But by the early 1800s they have long since lost the ability to perform magic. They can only write long, dull papers about it, while fairy servants are nothing but a fading memory.

But at Hurtfew Abbey in Yorkshire, the rich, reclusive Mr Norrell has assembled a wonderful library of lost and forgotten books from England's magical past and regained some of the powers of England's magicians. He goes to London and raises a beautiful young woman from the dead. Soon he is lending his help to the government in the war against Napoleon Bonaparte, creating ghostly fleets of rain-ships to confuse and alarm the French.

All goes well until a rival magician appears. Jonathan Strange is handsome, charming, and talkative-the very opposite of Mr Norrell. Strange thinks nothing of enduring the rigors of campaigning with Wellington's army and doing magic on battlefields. Astonished to find another practicing magician, Mr Norrell accepts Strange as a pupil. But it soon becomes clear that their ideas of what English magic ought to be are very different. For Mr Norrell, their power is something to be cautiously controlled, while Jonathan Strange will always be attracted to the wildest, most perilous forms of magic. He becomes fascinated by the ancient, shadowy figure of the Raven King, a child taken by fairies who became king of both England and Faerie, and the most legendary magician of all. Eventually Strange's heedless pursuit of long-forgotten magic threatens to destroy not only his partnership with Norrell, but everything that he holds dear.

Elegant, witty, and flawlessly detailed, "Jonathan Strange & Mr Norrell" is the breakout smash of the fall--a magisterial first novel that draws readers into Susanna Clarke's fantastic and utterly convincing vision of a past world.

SUSANNA CLARKE was born in Nottingham, England, in 1959, the eldest daughter of a Methodist minister. She was educated at St Hilda's College, Oxford, and has worked in various areas of nonfiction publishing. Susanna lives in Cambridge with her partner, the novelist and reviewer Colin Greenland.

SIMON PREBBLE, a veteran British narrator and performer of considerable experience and talent, has enjoyed a varied career from soap opera to Shakespeare. One of AudioFile's lauded "Golden Voices," he has recorded over 250 audiobooks and his performances have received critical acclaim both in the U.S. and the U.K.

“Ravishing...superb...combines the dark mythology of fantasy with the delicious social comedy of Jane Austen into a masterpiece of the genre that rivals Tolkien.”—Time

“Clarke welcomes herself into an exalted company of British writers—not only, some might argue, Dickens and Austen, but also the fantasy legends Kenneth Grahame and George MacDonald—as well as contemporary writers like Susan Cooper and Philip Pullman.”—The New York Times Book Review

“Many books are to be read, some are to be studied, and a few are meant to be lived in for weeks. Jonathan Strange & Mr Norrell is of this last kind.” —Washington Post

“Narrated with sights and sounds that make you feel as if you’re back in 19th-century England.” – Good Housekeeping