Children of the Mind (The Ender Quintet #4) (CD-Audio) 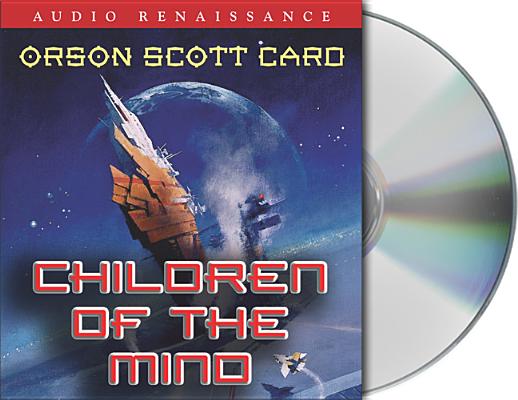 By Orson Scott Card, Gabrielle de Cuir (Read by), John Rubinstein (Read by)
UNAVAILABLE AT THIS TIME (Possible reasons: Backordered, Out-of-Stock Indefinitely, or Print-on-Demand only)
OUT OF PRINT

This is book number 4 in the The Ender Quintet series.

The planet Lusitania is home to three sentient species: the Pequeninos, a large colony of humans, and the Hive Queen, who was brought there by Ender Wiggin. But now, once again, the human race has grown fearful; the Starways Congress has gathered a fleet to destroy Lusitania. Ender's oldest friend, Jane, an evolved computer intelligence, can save the three sentient species of Lusitania. She has learned how to move ships outside the universe, and then instantly back to a different world, abolishing the light-speed limit. But it takes all the processing power available to her, and the Starways Congress is shutting down the network of computers in which she lives, world by world.

Children of the Mind is the fourth book in Orson Scott Card's Ender Quintet.

Orson Scott Card is best known for his science fiction novel Ender's Game and its many sequels that expand the Ender Universe into the far future and the near past. Those books are organized into the Ender Quintet, the five books that chronicle the life of Ender Wiggin; the Shadow Series, that follows on the novel Ender's Shadow and are set on Earth; and the Formic Wars series, written with co-author Aaron Johnston, that tells of the terrible first contact between humans and the alien "Buggers." Card has been a working writer since the 1970s. Beginning with dozens of plays and musical comedies produced in the 1960s and 70s, Card's first published fiction appeared in 1977--the short story "Gert Fram" in the July issue of The Ensign, and the novelette version of "Ender's Game" in the August issue of Analog. The novel-length version of Ender's Game, published in 1984 and continuously in print since then, became the basis of the 2013 film, starring Asa Butterfield, Harrison Ford, Ben Kingsley, Hailee Steinfeld, Viola Davis, and Abigail Breslin. Card was born in Washington state, and grew up in California, Arizona, and Utah. He served a mission for the LDS Church in Brazil in the early 1970s. Besides his writing, he runs occasional writers' workshops and directs plays. He frequently teaches writing and literature courses at Southern Virginia University.

He is the author many sf and fantasy novels, including the American frontier fantasy series "The Tales of Alvin Maker" (beginning with Seventh Son). There are also stand-alone science fiction and fantasy novels like Pastwatch and Hart's Hope. He has collaborated with his daughter Emily Card on a manga series, Laddertop. He has also written contemporary thrillers like Empire and historical novels like the monumental Saints and the religious novels Sarah and Rachel and Leah. Card's recent work includes the Mithermages books (Lost Gate, Gate Thief), contemporary magical fantasy for readers both young and old. Card lives in Greensboro, North Carolina, with his wife, Kristine Allen Card. He and Kristine are the parents of five children and several grandchildren.

Gabrielle de Cuir is a Grammy-nominated and Audie Award-winning producer whose narration credits include the voice of Valentine in Orson Scott Card’s Ender novels, Ursula K. Le Guin’s The Tombs of Atuan, and Natalie Angier’s Woman, for which she was awarded AudioFile magazine’s Golden Earphones Award.  She lives in Los Angeles where she also directs theatre and presently has several projects in various stages of development for film.

John Rubinstein made his debut as the title role in Bob Fosse’s Pippin. He is a skillful, AudioFile Earphones Award-winning narrator who has read works by Jonathan Kellerman, Orson Scott Card, Tom Clancy, and Gabriel Brownstein. Rubinstein is also a successful actor and has acted in the films Jekyll, Choose Conner, The Truth About Layla, and 21 Grams.  His television credits include The Young and the Restless, Greek, Desperate Housewives, Day Break, Criminal Minds, Cold Case, CSI and Law & Order.

“In his afterword, Card declares, ‘The ideal presentation of any book of mine is to have excellent actors perform it in audio only format,' and he gets his wish. Card's phenomenal emotional depth comes through in the quiet, carefully paced speech of each performer. This is a wonderful way to experience Card's best-known and most celebrated work, both for longtime fans and for newcomers.” —Publishers Weekly on Ender's Game

“The cast… gives life to the emotional and intellectual challenge of the story. Brilliant and compelling.” —AudioFile on Speaker for the Dead