Fatal System Error: The Hunt for the New Crime Lords Who Are Bringing Down the Internet (Paperback) 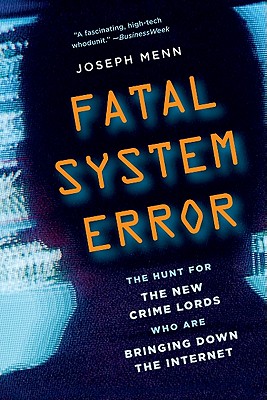 In 2004, a California computer whiz named Barrett Lyon uncovered the identity of a hacker running major assaults on business websites. Without fully grasping the repercussions, he set on an investigation that led him into the heart of the Russian mob. Cybercrime was evolving. No longer the domain of small-time thieves, it had been discovered by sophisticated gangs. They began by attacking corporate websites but increasingly stole financial data from consumers and defense secrets from governments.

While Barrett investigated the cutting edge of technology crime, the U.S. government struggled to catch up. Britain, however, was a different story. In the late 1990s, the Queen herself had declared safe e-commerce a national security priority. Agents from the London-based National Hi-Tech Crime Unit sought out Barrett and enlisted his help. They also sent detective Andrew Crocker, a Welsh former boxer, to Russia to track down and prosecute the hackers -- and to find out who they worked for.

Fatal System Error penetrates both the Russian cyber-mob and the American mafia as the two fight over the Internet's massive spoils. It takes readers into the murky hacker underground, traveling the globe from San Francisco to Costa Rica, London, and Russia. Using unprecedented access to mob businesses and Russian officials, it shows how top criminals earned protection from the Russian government -- and how Barrett Lyon and Andrew Crocker got closer to the titans of the underground economy than any previous outsider. Together, their stories explain why cybercrime is much worse than you thought -- and why the Internet might not survive.

An investigative reporter for Reuters, Joseph Menn is the longest serving and most respected mainstream journalist on cyber security. He has won three Best in Business awards from the Society of American Business Editors & Writers and been a finalist for three Gerald Loeb Awards. His Fatal System Error: The Hunt for the New Crime Lords who are Bringing Down the Internet exposed the Russian government's collaboration with organized criminal hackers and was named one of the 10 best nonfiction books of 2010 by Hudson Booksellers.

He also wrote the definitive All the Rave: The Rise and Fall of Shawn Fanning's Napster, an Investigative Reports & Editors Inc. finalist for book of the year. He previously worked for the Financial Times, Los Angeles Times, and Bloomberg and has spoken at conferences including Def Con, Black Hat, and RSA. He grew up near Boston and lives in San Francisco.

BBC Focus Magazine
“The issues raised are hugely important, and failure to deal with criminals behind so much online crime will be an embarrassment to governments worldwide.”

Business Week
“In profiling two eclectic cyber-crime fighters, Menn has crafted a fascinating high-tech whodunit that educates even as it entertains.”

The Guardian
“Menn spins racy tales of true-life cybercrime...The villains glory in handles such as ‘Bra1n’, and the heroes are portrayed respectively as Matthew Broderick from Wargames and Daniel Craig's Bond, but the narrative glitter is sprinkled on top of serious and thorough reporting. Menn concludes: ‘A number of enormously powerful national governments, especially those of Russia and China, have picked the blossoming of the internet age as the time to ally with organised crime.’”

Richard Stiennon, founder of T-Harvest and former VP of Threat Research at Webroot Software
“Not since Cliff Stoll’s The Cuckoo's Egg: Tracking a Spy Through the Maze of Computer Espionage has there been a book that delves as deeply into the workings of criminal hackers. This book will be widely read by law enforcement, policy makers, and IT security professionals. Like Stoll’s book I predict it will inspire a generation of technologists to join the battle against cyber criminals."

Register“An informative and entertaining look at the roots of the burgeoning cybercrime economy and its links to government, featuring a rogue's gallery of international wrong 'uns…. It's one of the best descriptions of the formation of the underground economy I've read. It deserves to be read by those in the IT security industry, policy formation and with any interest in a hype-free expose of the true face of cybercrime.”

The Guardian“Menn's book is riveting, as much for the terrifying detail it includes – both about gambling sites and the extent of botnet infection and the feckless lack of high-level international cooperation – especially by George Bush's administration – that allowed their architects to enrich themselves.”

"Fatal System Error is an enjoyable read on par [with] books such as The Cuckoo's Egg: Tracking a Spy Through the Maze of Computer Espionage and Takedown: The Pursuit and Capture of Kevin Mitnick."

Processor
“Menn’s deconstruction of an especially sophisticated set of attacks, the victim’s countermeasures, and eventual criminal investigation of the web of attackers is a valuable wake-up call for IT pros that should serve to catalyze redoubled efforts to improve cybersecurity.”

Slashdot
Fatal System Error: The Hunt for the New Crime Lords Who are Bringing Down the Internet is the wake-up call that those in Washington, and those charged with IT need to wake up to. Unfortunately, it is likely those that truly need to read this book, will press the information security snooze button yet again.

Los Angeles Times, April 27, 2010
“[E]ven an unbiased observer would say that Fatal System Error is a compelling read, despite the fact that it’s nonfiction (or maybe because it’s nonfiction). It’s also a very frightening book.”

Jonathan Zittrain, Professor of Law, Harvard Law School; Co-Founder, Berkman Center for Internet & Society and author of The Future of the Internet—And How to Stop It“Joseph Menn immerses us in the personalities and politics behind today's cybersecurity threats and countermeasures. This balanced, compelling account shows why the future of the Internet depends more on people of good will than on some technological magic bullet."

Vicky Raab, The New Yorker
“[Fatal System Error] kept me riveted to the couch all weekend”

Quentin Hardy, Forbes
“[A] well-reported book on some of the biggest (known) cybercrimes in the past decade… Menn's book could hardly be more timely.”

Network World
“As eye-popping as the book's portrayal of bookies and wise-guy swagger is… the second half of the book is even more mind-blowing.”