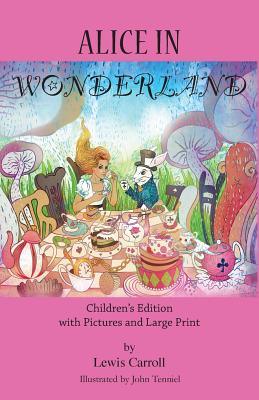 This is the story of a girl named Alice who was about to pick some daisies one day when she saw a white rabbit with pink eyes. He was dressed in a waistcoat, took out a watch, looked at it, and said he'd be late. He ran down a rabbit hole and Alice, who was amazed, followed him. She fell way, way down the rabbit hole and when she finally landed, her adventures in Wonderland began. She had found another world, previously hidden to people. As she explored this new world she met many interesting characters that are all able to talk, like the White Rabbit that she followed, a mouse, a blue caterpillar, the Chesire Cat, the Mock Turtle, the March Hare, the Hatter, a dormouse, the Queen of Hearts, the King of Hearts, a duck, a lizard, a puppy, and a gryphon, which is half lion and half eagle. The great thing about Wonderland is that Alice takes you along with her as the story gets told, so you don't have to fall down a rabbit hole and get lost yourself. But you can still experience all of her amazing adventures, which is why this is one of the most favorite stories in the world.