Delirium: The Politics of Sex in America (Hardcover) 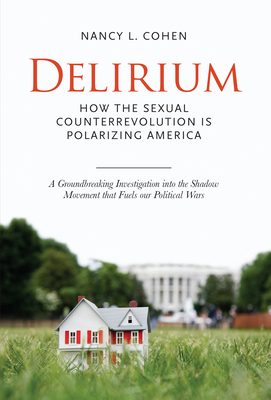 By Nancy L. Cohen
$27.00
UNAVAILABLE-Possible Reasons: Backordered, Out-of-Stock, or Out-of-Print (But email us to search for a copy.)

"Perhaps if the Pill had never been invented, American politics would be very different today," Nancy L. Cohen writes in her prescient new book, Delirium: The Politics of Sex in America

The 2012 election was supposed to be about the economy, but over the last few months it turned into a debate about sex and women's rights. In Delirium, Cohen takes us on a gripping journey through the confounding and mysterious episodes of our recent politics to explain how we and why we got to this place. Along the way she explores such topics as why Bill Clinton was impeached over a private sexual affair; how George W. Bush won the presidency by stealth; why Hillary lost to Obama; why John McCain chose Sarah Palin to be his running mate; and what the 2012 presidential contest tells us about America today. She exposes the surprising role of right–wing women in undermining women's rights, as well as explains how liberal men were complicit in letting it happen. Cohen uncovers the hidden history of an orchestrated, well–financed, ideologically powered shadow movement to turn back the clock on matters of gender equality and sexual freedom and how it has played a leading role in fueling America's political wars. Delirium tells the story of this shadow movement and how we can restore common sense and sanity in our nation's politics.

Nancy L. Cohen is a historian and author of four books, including the widely acclaimed Delirium: The Politics of Sex in America and The Reconstruction of American Liberalism. Her writing on American politics has appeared in the Guardian, the Los Angeles Times, the New Republic, Rolling Stone, and other publications. She has taught politics and history at Occidental College, UCLA, and Cal State Long Beach. Cohen serves as a commissioner on the Los Angeles County Commission for Women. She lives in Los Angeles with her husband and two daughters.

"A thrilling and prescient story of America today." —Mike Davis

"An insightful look at the history of sexual mores and politics and how we got to such a contentious place." —Booklist

"In her critique of bipartisan extremism, historian Cohen expertly details its rise within the Democratic and Republican parties by mining seven presidential elections … Cohen uses quantitative evidence to claim, quite cogently, that the sexual counterrevolution has overplayed its hand and that "cultural progressivism is the new American way," making this book an impressive contribution to the political dialogue." —Publishers Weekly

"Nancy L. Cohen narrates the history and continued salience of the sexual backlash with the wisdom of a fine historian and the passion of a liberal activist. Delirium is an indispensable source for understanding how profoundly the politics of the body has swayed the body politic." —Michael Kazin, author of American Dreamers: How the Left Changed a Nation

"With abortion rights, birth control, and gay marriage still roiling American politics, it is obvious that the conservative reaction against the sexual revolution of the 1960s and 1970s remains a powerful force in our world today. Nancy L. Cohen, a lively writer and excellent historian, places our current situation in historical perspective, tracing how over the past forty years the sexual counterrevolution has helped shape the political landscape. A fascinating and disturbing book." —Eric Foner, Columbia University

"Nancy L. Cohen's Delirium is a provocative and original examination of the politics of equality—those who believe in our basic rights, and those who do not. She deftly takes us through forty years of history to explain why our country feels so divided, and, more importantly, how we can find our way back to rational political discourse. Anyone who cares about civil rights and the future of the country needs to read this book." —Lisa Bloom, legal analyst and New York Times bestselling author of Think