Powerful Prayers: Conversations on Faith, Hope, and the Human Spirit with Today's Most Provocative People (Paperback) 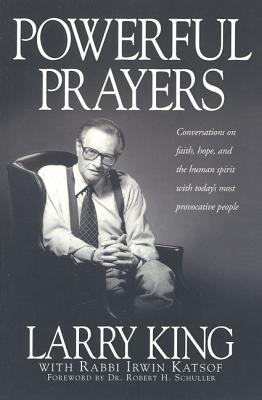 In Larry King’s Powerful Prayers: Conversations on Faith, Hope, and the Human Spirit with Today’s Most Provocative People, the Emmy Award-winning king of the interview asks some of the world’s most prominent, glamorous, and intriguing figures to answer the most profound questions of our times--questions that deal with the resurgence of faith and spirituality.

Recent surveys indicating fifty percent of all Americans are now praying at least once a day, and nine out of ten people in the nation's largest and most unconventional city, New York, believe in God. The current public attraction toward religion-oriented books, radio and television programs further reflects this renewed interest in spirituality.

Powerful Prayers examines the lives that have been suddenly and permanently altered through prayer, and lives that are sustained by its everyday practice. It reveals the prayers of world leaders prior to crucial decisions, businessmen before closing a big deal, players and coaches before the big game, and generals during battle, then questions if praying to win is the same as praying for someone else to lose. It explores prayers of thanks and prayers for things, and asks if offering something in return for answered prayers is simply bargaining with God.

Powerful Prayers is fascinating, informative, insightful, and inspirational. It is a perfect blend of the secular and the spiritual--a bestseller with heart.

Larry King (1933-2021) was an Emmy, Peabody, and CableAce award-winning broadcaster, interviewer, renowned journalist, and bestselling author. As the host of CNN’s Larry King Live for twenty-five years, he conducted interviews with celebrities, politicians, and entrepreneurs, among many non-famous people over a career that totaled more than 60,000 interviews. Between 1982 and 2001, he wrote a regular column for USA Today, and in 2012, he cofounded the company Ora TV which produced his web series Larry King Now, exclusively streamed by Hulu.

King’s books include Powerful Prayers: Conversations on Faith, Hope, and the Human Spirit with Today’s Most Provocative People, Truth Be Told: Off the Record About Favorite Guests, Memorable Moments, Funniest Jokes, and a Half Century of Asking Questions, and My Remarkable Journey.

Rabbi Irwin Katsof is the executive vice-president of the Jerusalem Fund of Aish HaTorah, an international educational organization dedicated to the preservation of Jewish religion and heritage.

“Powerful Prayers is a book for the ages. The words of enlightment from these powerful personalities will inform and touch you. And the humor and passion of King's odyssey with Rabbi Katsof will inspire you to take an introspective look at your faith, or move you to take a spiritual journey of your own.” —Jewish Journal

“Mr. King brings his famous interview skills to bear on what he calls 'the big conversation.' The result-a stirring, humorous, sometimes exhilarating exploration of why and how people pray and the impact prayer has on their lives-plumbs new depths for the celebrity interview.” —The Christian Science Monitor