Medal of Honor, Revised & Updated Third Edition: Portraits of Valor Beyond the Call of Duty (Hardcover) 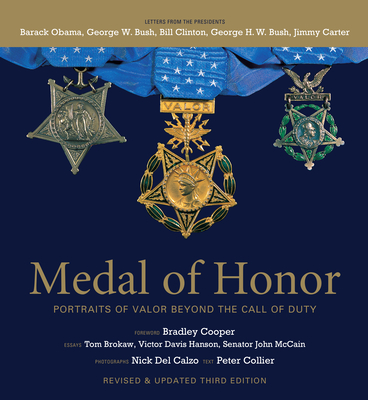 An updated edition of the New York Times bestseller, featuring 12 new recipients and a new foreword by Bradley Cooper

Eight veterans from the war in Afghanistan have been awarded our nation’s highest honor for valor in combat since the publication of the third edition of Medal of Honor, including Edward C. Byers, Jr., the newest living recipient and a member of Navy SEAL Team Six, and Clint Romesha, author of the New York Times bestselling Red Platoon. And nearly 50 years after their service, four Vietnam veterans have also since received the recognition they so richly deserve. Now these men rightly take their place in the pages of this revised and updated edition.

Included here are 156 Medal of Honor recipients, captured with a contemporary portrait by award-winning photographer Nick Del Calzo and profiled in moving text by National Book Award nominee Peter Collier. The men in the book fought in conflicts from World War II to Afghanistan, served in every branch of the armed services, and represent a cross section as diverse as America itself. This is their ultimate record.

Peter Collier is the author of Choosing Courage, published by Artisan in 2015; The Rockefellers: An American Dynasty; The Kennedys: An American Drama; and The Roosevelts: An American Saga. He lives in Nevada City, California.

Nick Del Calzo created The Triumphant Spirit, a book of portraits and profiles of Holocaust survivors. He traveled to more than 33 states to photograph these recipients over the course of more than seven years.