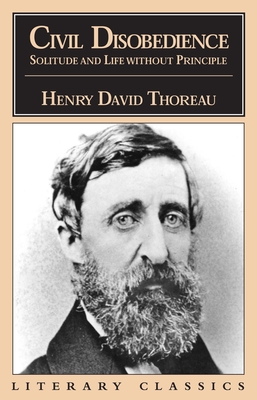 Henry David Thoreau (1817-1862) championed the belief that people of conscience were at liberty to follow their own opinion. In these selections from his writings, we see Thoreau the individualist and opponent of injustice. Civil Disobedience (1849), composed following Thoreau's imprisonment for refusing to pay his taxes in protest against slavery and the Mexican War, is an eloquent declaration of the principles that make revolution inevitable in times of political dishonor. Solitude, from his masterpiece, Walden (1854), poetically describes Thoreau's oneness with nature and the companionship solitude offers to those who want to be rid of the travails of the world to discover themselves. Life without Principle (posthumously published 1863) decries the way in which excessive devotion to business and money coarsens the fabric of society: in merely making a living, the meaning of life gets lost.

Henry David Thoreau (1817–1862) is one of the most inspirational figures in American literature. He is the author of dozens of books and essays, including On Civil Disobedience, The Maine Woods, and A Week on the Concord and Merrimack Rivers. Thoreau was a noted transcendentalist whose year and a half living in the wilderness was chronicled in the storied and beloved 1854 memoir Walden.