Blackwater: The Rise of the World's Most Powerful Mercenary Army (Paperback) 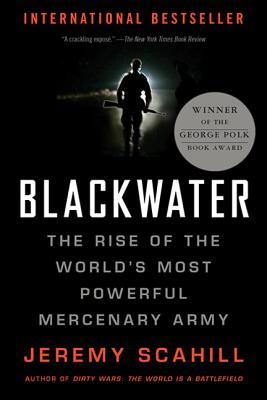 Award-winning journalist Jeremy Scahill takes us from the bloodied streets of Iraq to hurricane-ravaged New Orleans to the chambers of power in Washington, to reveal the frightening new face of the U.S. military machine, and what happens when you outsource war."A crackling expose" -- New York Times Book Review"[Scahill] is a one-man truth squad" -- Bill Moyers"[An] utterly gripping and explosive story" -- Naomi Klein, The Guardian

Jeremy Scahill is an investigative reporter, war correspondent, and author of the international bestsellers Blackwater: The Rise of the World's Most Powerful Mercenary Army and Dirty Wars: The World is a Battlefield. He has reported from Afghanistan, Iraq, Somalia, Yemen, Nigeria, the former Yugoslavia, and elsewhere across the globe. He is a co-founder of The Intercept and has served as the National Security Correspondent for the Nation magazine and Democracy Now! Scahill is a Puffin Foundation Writing Fellow at The Nation Institute and was twice awarded the prestigious George Polk Award. He is a producer and writer of the award-winning film Dirty Wars, which premiered at the 2013 Sundance Film Festival and was nominated for an Academy Award.