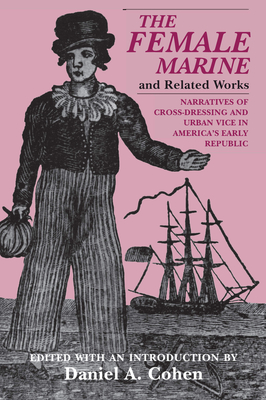 By Daniel A. Cohen (Editor)
$25.95
UNAVAILABLE: Backordered or Out-of-Print (But email us to search for a used copy.)

This is the first complete modern edition of The Female Marine, a fictional cross-dressing trilogy originally published between 1815 and 1818. Enormously popular among New England readers, the tale in various versions appeared in no fewer than nineteen editions over that brief four-year span. This new edition appends three other contemporary accounts of cross-dressing and urban vice which, together with The Female Marine, provide a unique portrayal of prostitution and interracial city life in early-nineteenth-century America.

The alternately racy and moralistic narrative recounts the adventures of a young woman from rural Massachusetts who is seduced by a false-hearted lover, flees to Boston, and is entrapped in a brothel. She eventually escapes by disguising herself as a man and serves with distinction on board the U.S. frigate Constitution during the War of 1812. After subsequent onshore adventures in and out of male dress, she is happily married to a wealthy New York gentleman.

In his introduction, Daniel A. Cohen situates the story in both its literary and historical contexts. He explains how the tale draws upon a number of popular Anglo-American literary genres, including the female warrior narrative, the sentimental novel, and the urban exposé. He then explores how The Female Marine reflects early-nineteenth-century anxieties concerning changing gender norms, the expansion of urban prostitution, the growth of Boston's African American community, and feelings of guilt aroused by New England's notoriously unpatriotic activities during the War of 1812.

Associate professor of history at Florida International University, Daniel A. Cohen is author of Pillars of Salt, Monuments of Grace: New England Crime Literature and the Origins of American Popular Culture, 1674-1860.

"The woeful yet exciting tale of Lucy Brewer, girl adventurer, puts an unexpected twist on the classic seduction narrative, and its multiple editions and sequels have confused historians for nearly two centuries: was the story truth or fiction? Daniel A. Cohen's painstaking account of the construction of the tale is a model for how historians evaluate and authenticate evidence."—Patricia Cline Cohen, University of California, Santa Barbara

"As a text for classroom adoption, The Female Marine is wonderfully readable and intellectually provocative. It should find ready audiences in scholars and students working on women's history, American culture, and cross-dressing."—Elizabeth Young, Mount Holyoke College