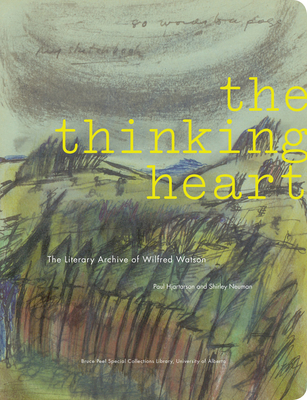 By Paul Hjartarson, Shirley Neuman
$34.95
Email or call for price.

This exhibition catalogue celebrates the life and work of avant garde poet and playwright Wilfred Watson. Drawing on the rich collection of letters, notebooks, manuscripts and sketchbooks in the University of Alberta Archives' Wilfred Watson Fonds, this exhibition traces Watson's development from his early encounters with the work of T.S. Eliot, Dylan Thomas and Emily Carr to his decades-long engagement with the writing of Gabriel Marcel, Wyndham Lewis, and Marshall McLuhan, and from his initial work on stage to his career-changing involvement in the Edmonton theatre community centred on Studio Theatre, Walterdale Theatre and the Yardbird Suite. The archives include a rich correspondence between Wilfred Watson and his wife, Sheila Watson, and many notebook entries describing the two writers' lifelong dialogue.

Paul Hjartarson is Professor Emeritus in English and Film Studies at the University of Alberta. His scholarly work is on life-writing, Canadian literature, modernism, print culture and the digital humanities. His most recent book, co-authored with Shirley Neuman, is The Thinking Heart: The Literary Archive of Wilfred Watson (2014). Until his retirement, Paul Hjartarson was a Professor of English at the University of Alberta and has published on both Baroness Elsa and Frederick Philip Grove. Shirley Neuman is Professor Emeritus, University of Toronto.