War Is a Racket - The Antiwar Classic by America's Most Decorated Soldier: Illustrated Edition (Paperback) 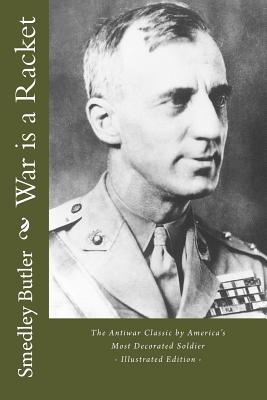 Unique among the high ranking military officers of the US and the world I do not know of any other high ranking military officer of the US or the world, who has spoken or written such most important truths and facts about the nature and causes of war. General Butler wrote these in simple and direct language that everyone can understand. His honesty; care for society, humanity, and justice for all; and profound insights; are self-evident in his writing. Moreover, it is even much more relevant now than when it was written in 1935. War Is a Racket is the title of two works, a speech and a booklet, by retired United States Marine Corps Major General and two time Medal of Honor recipient Smedley D. Butler. In them, Butler frankly discusses from his experience as a career military officer how business interests commercially benefit (including war profiteering) from warfare. After his retirement from the Marine Corps, Butler made a nationwide tour in the early 1930s giving his speech "War is a Racket." The speech was so well received that he wrote a longer version as a small book with the same title that was published in 1935 by Round Table Press, Inc., of New York. The booklet was also condensed in Reader's Digest as a book supplement which helped popularize his message. In an introduction to the Reader's Digest version, Lowell Thomas, the "as told to" author of Butler's oral autobiographical adventures, praised Butler's "moral as well as physical courage.