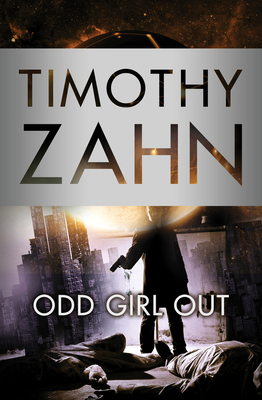 This is book number 3 in the Quadrail series.

Ex-government agent Frank Compton must keep an extraordinary little girl safe from the malevolent group intelligence seeking to enslave the universe in the explosive third installment of Hugo Award-winning author Timothy Zahn's Quadrail series Frank Compton is glad he's finally back on his home planet of Earth--galaxy-hopping aboard the Quadrail on his continuing mission to prevent the Modhri group mind from ruling the universe is exhausting business--but hadn't expected to find a young woman waiting for him in his New York apartment with a loaded gun in her hand. Ignoring her demands that he rescue her 10-year-old sister, the former Western Alliance Intelligence agent sends his unwelcome guest packing--only to find himself under arrest the following day for her brutal murder. Released on bail and determined to do the right thing, Compton makes tracks for the world of New Tigris. But a captive child is not all that he discovers there: Little Rebekah may also hold the key to the ultimate defeat of the Modhri. Suddenly, keeping one small girl safe is the most important--and dangerous--task Compton has ever undertaken. And with the Modhris' mind-slave "walkers" everywhere, there may be no safe place for an "abomination" and her protector to hide.

Timothy Zahn is the Hugo Award-winning author of more than thirty SF novels, including the Dragonback series, as well as "Night Train to Rigel," "The Third Lynx," "Blackcollar: The Judas Solution" and the Dragonback sextet. He has also written the all-time bestselling" Star Wars " spinoff novel, "Heir to the Empire," and other "Star Wars " novels, including the recent "Allegiance." He lives in coastal Oregon."