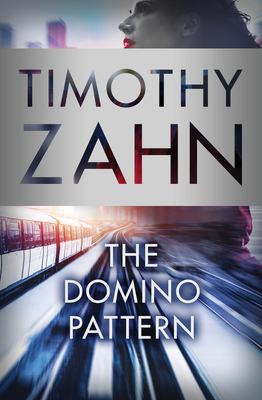 This is book number 4 in the Quadrail series.

Ex-government agent Frank Compton must halt a murderous plague that threatens to turn the galaxy-spanning Quadrail into a ghost train in the fourth installment of Hugo Award-winning author Timothy Zahn's acclaimed Quadrail series The Chahwyn created the Spiders to keep their intra-galactic transportation system, the Quadrail, safe and running smoothly, and contracted ex-security agent Frank Compton to protect its integrity. So far, Compton and his half-human, half-Chahwyn partner, Bayta, have had their hands full keeping this essential link between occupied worlds open and preventing the evil collective intelligence called the Modhri from using it to spread their mind-controlling infection. But now a new threat has boarded, one that troubles even the Modhri. While the Quadrail is en route to the farthest edge of the galaxy, a murder by poison occurs--then another and another--dark happenings that are not only disturbing but also technically impossible. The system Compton and Bayta have been charged with protecting is in grave danger of derailment, and unless they can get to the deep roots of a sinister conspiracy, chaos will come to the ordered universe. This tour de force from Hugo Award winner Timothy Zahn rockets the acclaimed Quadrail series to breathtaking new heights. The Domino Pattern is an ingenious amalgam of hard science fiction and locked-room murder mystery that would leave even the great Hercule Poirot bedazzled.