Running with the Champ: My Forty-Year Friendship with Muhammad Ali (Hardcover) 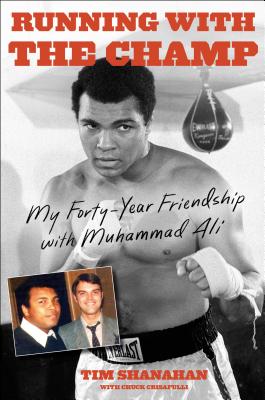 By Tim Shanahan, Chuck Crisafulli (With)
UNAVAILABLE AT THIS TIME (Possible reasons: Backordered, Out-of-Stock Indefinitely, or Print-on-Demand only)
OUT OF PRINT

A personal tribute to the remarkable friendship between Tim Shanahan and Muhammad Ali, including dozens of never-before-told stories about Ali, his family, his entourage, and various celebrities along the way—as well as never-before-published personal photos.

In 1976 Tim Shanahan was a medical-instruments salesman living in Chicago and was associated with a charity that arranged for athletes to speak to underprivileged kids. Muhammad Ali was also living in Chicago, having just reclaimed his title as heavyweight champion of the world after defeating George Foreman and Joe Frazier (“The Thrilla in Manila”). He was at the peak of his fame and athletic skill. Shanahan contacted Ali to ask whether he would participate in the program. Not only did Ali agree, he invited Shanahan to his house and then spent several hours talking to Shanahan. It was the beginning of a forty-year friendship.

In Running with the Champ, Shanahan shares the stories of various celebrities whom Ali met over the years, such as Michael Jackson (who showed Ali and Shanahan his doll collection), Elvis Presley, John Travolta, Andy Warhol, and many others. Ali invited Shanahan to sparring sessions (and once sparred with him) and the two men would often go running together in the early morning. Shanahan accompanied Ali to his Pennsylvania training camp as the Champ prepared to fight Ken Norton, Earnie Shavers, and Leon Spinks and he witnessed numerous unpublicized incidents of Ali’s generosity to people in need. When Ali moved to Los Angeles, Shanahan also relocated there. Running with the Champ is a touching, candid narrative of an extraordinary friendship that persevered through the best and worst of times.

Tim Shanahan has been a close and trusted friend of Muhammad Ali and his family for nearly forty years. He retired in 2013 as regional sales manager covering five Western states for a medical products company. Running with the Champ is his first book.

“When I heard that Tim Shanahan was writing a book about Muhammad Ali I was excited, because for the first time we’d get a chance to look at the Champ from the perspective of a real friend. In the years that I have spoken to Tim, it seems that we never run out of stories about the Great Ali. Tim has taken the term ‘brother’ to another level; no one has been as close to the Champ as Tim Shanahan. Read with me and celebrate true friendship.”
— George Foreman

“Oh my! This is the reader’s opportunity to get inside the ropes with ‘The Greatest.’ Tim Shanahan’s book is a knockout read, offering rare insight into the man regarded as the most powerful and prominent athlete of his time.”
— Dick Enberg

“Of all of his great achievements in life, from champion prizefighter to goodwill ambassador to instrument of hope for the underprivileged, it is quite lovely to learn that Muhammad Ali was also a devoted friend. In his affectionate memoir of their long and durable bond, Tim Shanahan reminds us of a sometimes overlooked aspect of The Champ—that in stride with the wonderful talent and wild antics that kept us so entertained walks a man of profound decency.”
— Mark Kram, Jr., author of the PEN Literary Award-winning Like Any Normal Day

“An affectionate portrait of boxing legend Muhammad Ali. . . . Charming moments abound. . . . If you're wondering why Ali is called ‘The Greatest,’ this . . . pleasant memoir makes for a good place to start.”
— Kirkus Reviews

“An engrossing story…of an enviable friendship. … Shanahan comes off as a likable guy…it's easy to understand why the fighter allowed him into his inner circle.”
— Publishers Weekly

“Shanahan presents a complex but less bombastic person than is popularly associated with the name; generous to a fault, devoted to his religion and…family, and a champion of the less fortunate. This view of a fabled boxer from the unusual angle of friendship offers justification beyond the boxing ring for calling Ali ‘The Greatest.’”
— Library Journal

Search My Must Reads E-Books