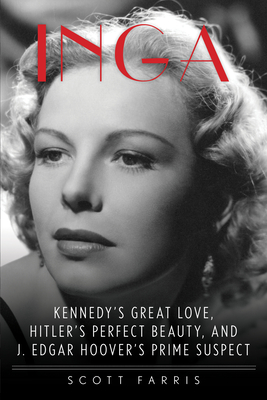 Inga Arvad was the great love of President John F. Kennedy's life, and also Adolf Hitler's special guest at the 1936 Berlin Olympics. She was an actress, a foreign correspondent, a popular Washington columnist, an explorer who lived among a tribe of headhunters, one of Hollywood's most influential gossip columnists, and a suspected Nazi spy. The latter nearly got Kennedy cashiered out of the Navy, but instead set in motion the chain of events that led to him becoming a war hero. Inga lived where gossip intersects with history, and her story, as told by author Scott Farris in Inga, is a rollicking story that demonstrates how private lives influence public events. It is also a Hitchcockian tale of how difficult it can be to prove innocence when unjustly accused, and how, as Inga phrased it, what was once a halo can slip down and become a hangman's noose. In addition to her romance with Kennedy and the attention of Hitler, Arvad married three times - to an Egyptian diplomat who insisted they never had divorced, the brilliant filmmaker Paul Fejos whom Charlie Chaplin considered a genius, and the famed cowboy movie star Tim McCoy. She also had affairs with noted surgeon Dr. William Cahan, the prolific writer John Gunther, and Winston's Churchill's right hand man, Baron Robert Boothby. She was pursued by Wall Street financier Bernard Baruch, and Swedish industrialist Axel Wenner-Gren, reputedly the richest man in the world at the time, offered her $1 million to have his child. Inga was Miss Denmark of 1931, but by all accounts her admirers among the European and American elite loved Inga not for her physical beauty alone, but for her joie de vivre. She was a genius with people, she was daring and adventurous, and she was their equal in intellect. Like Isak Dinesen and Clare Boothe Luce, Inga Arvad led a life that both sheds light on and defies the stereotypes of women of her time.

Scott Farris is the New York Times bestselling author of Kennedy & Reagan: Why Their Legacies Endure and Almost President: The Men Who Lost the Race but Changed the Nation. A former bureau chief for United Press International and a political columnist, he has interviewed most of the men and women who have sought the presidency over the past thirty years, and has managed several political campaigns. He appeared on the 2011 C-SPAN television series The Contenders, and has appeared on MSNBC's "Morning Joe" and "Melissa Harris-Perry." His work has been published in The New York Times, Washington Post, and Wall Street Journal. He lives in Portland, Oregon, with his wife and two children.