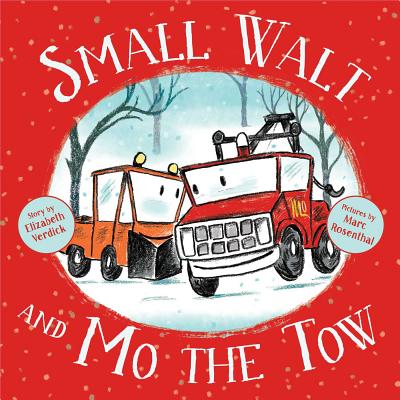 By Elizabeth Verdick, Marc Rosenthal (Illustrator)
$17.99
On Our Shelves Now

“Children ages 3–7 will rejoice as in Marc Rosenthal’s retro illustrations the little plow surges into action, rays of purposeful energy shooting off his red chassis.” —The Wall Street Journal

Small Walt befriends a tow truck when he comes across a car in need of help in this irresistible companion to Small Walt, which Kirkus Reviews called “charming and endearing” in a starred review.

We’re Gus and Walt
We plow and we salt
We clear the snow so the
Cars can go!

A bitter blizzard. A snowbound town. When a car skids off the road, Small Walt and Gus might not have what it takes to save the day on their own. But who does? Mo the Tow to the rescue!

When we need a tow,
We call on Mo…
We can depend
On our new friend!

Text filled with onomatopoeia and Walt’s affirming chants make this story about friendship and accepting help from others a real winner.

Elizabeth Verdick has written more than thirty books for toddlers to teens. She collaborated with Marc Rosenthal on Small Walt, which Kirkus Reviews called “reminiscent of Virginia Burton’s classics” in a starred review; and its sequel, Small Walt and Mo the Tow. She is also the author of Bike & Trike, illustrated by Brian Biggs. She is a graduate of the Hamline University MFA program and lives in Woodbury, Minnesota. Learn more at ElizabethVerdick.com.

Marc Rosenthal is the New York Times bestselling illustrator of many books for children, including Small Walt by Elizabeth Verdick; the Bobo series by Eileen Rosenthal; The Straight Line Wonder by Mem Fox; and Phooey!, which he wrote. Marc’s illustrations can be seen regularly in The New Yorker, Time, Forbes, Fortune, The Atlantic, The New York Times, The Boston Globe, The Washington Post, and others. Visit him online at Marc-Rosenthal.com.

Walt—a small but powerful, friendly-faced snowplow—continues to work with his driver, Gus. How can they help a green car that has gone off the road? Fans of Small Walt (2017) will not be disappointed. Along with a new, simple-but-satisfying plot, a few new characters, and new, whimsical motor noises, the text includes the winning refrain readers will recall from their earlier encounter with the team: "We're Gus and Walt. / We plow and we salt. / We clear the snow / so the cars can go!" This time, the pair is clearing a road "slick with ice" when they see a green car slide into a ditch. Walt is eager to scoop up the car, but Gus warns him to wait, as plows are for snow only. As Gus lends a hand to the green car's driver, Walt hears the "brumm-brumm-humma-hum" of Mo the Tow. Sue—a "lady in blue"—steers Mo toward the green car to tow it. Snow has been falling steadily, and the green car's owner sits in Gus' cab to stay warm. Before the story ends, Walt and Gus must rumble into action to help Mo and Sue drive close enough to rescue the car. Special kudos for the gender-stereotype-defying scenes of Sue confidently hitching and driving Mo. Delightful, retro artwork and clever text offer another tribute to teamwork and friendship. Gus is depicted with pale skin and Sue and the green car's driver with brown. Three dynamic duos: Gus and Walt; Sue and Mo; Verdick and Rosenthal. (Picture book. 3-6)
— Kirkus STARRED REVIEW

PreS-Gr 2–Small Walt is ready to plow. He might be smaller than the big yellow plows, but he is mighty tough and ready to go. There’s a blizzard and he’s out pushing drifts and scattering salt. Walt and his driver come across a little car that has slid right into a ditch! Walt’s driver gets out to help, and Mo the Tow shows up, too. Together with their drivers, Mo and Walt are able to pull and clear and the little green car home. This is the second entry about Walt, and it is a delightful addition to the many seasonal books that come out each winter. Particularly relevant to children who live in places where plow trucks and snowy weather are a regular occurrence. Rosenthal’s pencil illustrations give the book a classic touch. VERDICT A solid choice where snowy and winter picture books are relevant.–Shana Shea, Windsor Public Library, CT
— School Library Journal (online)

In this outing, Walt and Gus, making their rounds, see a car skid into a snow-filled ditch. Can they help? Despite his can-do spirit, Walk must now learn to deal with his limitations . . . Mo and Sue are the pair with the hardward and skills to perform this rescue--except it turns out they can't quite reach the stranded car; first they'll need some snow cleared. Are Walt and Gus up to it? No spoilers. Suffice to say all these characters have something useful they like to do and do well, and each has limits, too, making this a story about teamwork as well as pluck. . . . The characters are appealing, the and the language is active and satsifying, with plenty of onomatopoeia. . . . The flap copy tells us that "Small Walt" has been called "reminscent of Virginia Lee Burton's classics," and this book will be, too; the cover design practically dares you not to think of "Mike Mulligan and His Steam Shovel." Rosenthal's drawings feel like a contemporary take on Burton's spirit, though, rather than something derivative: Burton, after an espresso. The lines and colors are direct, cheerful and effective. They look like the work of someone in a good mood, and the put me in a good me to look at them.
— The New York Times Book Review

Snow is less a scenic backdrop than the principal antagonist in the cheerful, can-do pages of “Small Walt and Mo the Tow” by Elizabeth Verdick. In this sequel to 2017’s “Small Walt,” the doughty little snowplow Walt and his driver, Gus, watch with alarm as a green sedan skids off a snowy road into a deep ditch: “Fwump!” To Walt’s dismay, the rescue job is too big—“My plow is tough, / but it’s not enough”—so there’s relief all round when Mo the Tow and his driver, Sue, trundle into view. But what’s this? Mo’s tires are slipping in the snow? “Walt to the rescue!” Children ages 3-7 will rejoice as in Marc Rosenthal’s retro illustrations the little plow surges into action, rays of purposeful energy shooting off his red chassis.
— The Wall Street Journal