Politics: A Treatise on Government (Paperback) 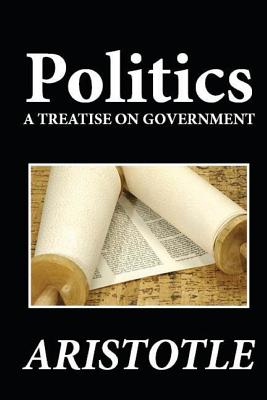 By Aristotle
$14.49
Usually Ships in 2-7 Days
(This book cannot be returned. It may be a print-on-demand title, or for some other reason)

In this book, Aristotle provides many brilliant insights into the political thinking and strategy of political and military leaders. In many ways, it remains unsurpassed and it ought to be required reading in undergraduate classes on political strategy. Aristotle's descriptions of governments fit well with small city-states as were common in ancient Greece, making his book a good read for anyone interested in politics. Several principles he covers are valid today, and there is much to be learned from his thoughts. When reading Aristotle, it is important to understand that he lived in a totally different world where slavery was acceptable and universal suffrage was considered dangerous. Therefore his definition of a democracy varies quite a bit from the modern definition. His view of government involvement in people's lives is surprising, such as what and how children should be taught or what career they should be directed into. Aristotle covers a wide range of topics, ranging from property rights and slavery to money-making and taxes. Many journal articles and books published today reflect Aristotle's ideas in one way or another. Among books that serve as a source from where modern political philosophies have emerged, this is a must read. Your eyes will be opened as realize Aristotle's dilemmas are very similar, if not the same, to the dilemmas faced by culture today.

Aristotle (384 BC - 322 BC) was a Greek philosopher, a student of Plato and teacher of Alexander the Great. His writings cover many subjects, including physics, metaphysics, poetry, theater, music, logic, rhetoric, linguistics, politics, government, ethics, biology, and zoology. Together with Plato and Socrates (Plato's teacher), Aristotle is one of the most important founding figures in Western philosophy. Aristotle's writings were the first to create a comprehensive system of Western philosophy, encompassing morality and aesthetics, logic and science, politics and metaphysics. Aristotle's views on the physical sciences profoundly shaped medieval scholarship, and their influence extended well into the Renaissance, although they were ultimately replaced by Newtonian physics. In the zoological sciences, some of his observations were confirmed to be accurate only in the 19th century. His works contain the earliest known formal study of logic, which was incorporated in the late 19th century into modern formal logic. In metaphysics, Aristotelianism had a profound influence on philosophical and theological thinking in the Islamic and Jewish traditions in the Middle Ages, and it continues to influence Christian theology, especially the scholastic tradition of the Catholic Church. His ethics, though always influential, gained renewed interest with the modern advent of virtue ethics. All aspects of Aristotle's philosophy continue to be the object of active academic study today. Though Aristotle wrote many elegant treatises and dialogues (Cicero described his literary style as "a river of gold"), it is thought that the majority of his writings are now lost and only about one-third of the original works have survived.