Lives Between The Lines: A Journey in Search of the Lost Levant (Hardcover) 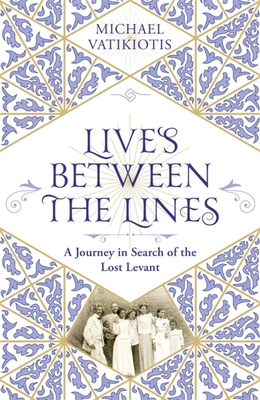 The story begins with a parting of the sands - the construction of the Suez Canal that united the Mediterranean with the Arabian Sea. It opened the door of opportunity for people living insecurely on the fringes of a turbulent Europe.

The Middle East is understood today through the lens of unending conflict and violence. Lost in the litany of perpetual strife and struggle are the layers of culture and civilisation that accumulated over centuries, and which give the region its cosmopolitan identity. It was once a region known poetically as the Levant - a reference to the East, where the sun rose. Amid the bewildering mix of races, religions and rivalries, was above all an affinity with the three monotheistic religions: Judaism, Christianity and Islam.

Today any mixing of this trinity of faiths is regarded as a recipe for hatred and prejudice. Yet it was not always this way. There was a time, in the last century, when Arabs and Jews rubbed shoulders in bazaars and teashops, worked and played together, intermarried and shared family histories. Michael Vatikiotis's parents and grandparents were a product of this forgotten pluralist tradition, which spanned almost a century from the mid-1800s to the end of the Second World War in 1945. The Ottoman empire, in a last gasp of reformist energy before it collapsed in the 1920s, granted people of many creeds and origins generous spaces to nestle into and thrive. The European colonial order that followed was to reveal deep divisions. Vatikiotis's family eventually found themselves caught between clashing faiths and contested identity. Their story is of people set adrift, who built new lives and prospered in holy lands, only to be caught up in conflict and tossed on the waves of a violent history.

Lives Between the Lines brilliantly recreates a world where the Middle East was a place to go to, not flee from, and the subsequent start of a prolonged nightmare of suffering from which the region has yet to recover.

Michael Vatikiotis is a graduate of the School of Oriental and African Studies in London and gained his doctorate from the University of Oxford. He is a member of the Asia Society's International Council and has a decade of experience working as a private diplomat and conflict mediator for the Geneva-based Centre for Humanitarian Dialogue. Prior to that he worked as a journalist in Asia for thirty years, living in Indonesia, Malaysia, Thailand and Hong Kong. He is the author of two previous books on the politics of Southeast Asia and is based in Singapore.

Lives Between the Lines is the moving and beautifully written story of a journey to explore [Vatikiotis's] identity by visiting the places - primarily Egypt and Israel - in which several generations of his Levantine ancestors made their homes. As well as being a highly personal family-memoir-cum-travelogue, it is a paean to tolerance between diverse faiths and different communities at a time when much of the Middle East is being consumed by bigotry, fanaticism and sectarian violence—Justin Marozzi, FINANCIAL TIMES

Vatikiotis's pen portraits left me wanting more of this amazing cast of characters. For the family are bit-part players in what is in fact a potted history of the late Levant, living proofs in his view of the Ottoman Empire's enlightened approach to minority cultures . . . Vatikiotis's final two chapters describe and acknowledge the ambiguities consequent on Britain's eventual imperial retreat and the region's expulsions of foreigners - British, Jewish, Greek, Italian alike. They are easily the finest and worth the cover price alone . . . fascinating—Richard Spencer, THE TIMES

Vatikiotis is quietly opinionated, a quality which makes him an admirable guide for this evocation of an era - a journey of personal discovery, where, despite complexities, everything stands neatly in historical and topographical context

A brilliant evocation of an era when the Middle East was a haven of peace and prosperity for people fleeing Europe. Lives Between the Lines interweaves a fascinating family history with a portrait of a lost world - which has many echoes and lessons for today—Gideon Rachman