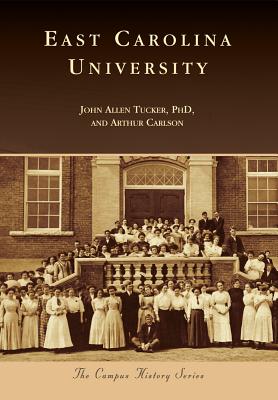 By John Allen Tucker Phd, Arthur Carlson
$21.99
UNAVAILABLE-Possible Reasons: Backordered, Out-of-Stock, or Out-of-Print (But email us to search for a copy.)

John Allen Tucker, PhD, and Arthur Carlson as they uncover the past of East Carolina University in this unique history.

East Carolina University was founded by the State of North Carolina in 1907 as a teacher training school meant to provide professionally trained faculty for schools in the eastern part of the state. Within two decades, the school matured into a teacher's college. Although coeducational from the start, the vast majority of the student body early on was female. Following World War II and the gender transformation of higher education resulting from successive GI Bills, East Carolina emerged with increasing balance as the male student body grew to match the female population on campus. In subsequent decades, East Carolina continued to expand academically, emerging as a research university with a medical school and a dental school. Today, ECU is a leading producer of K-12 teachers in the Southeast as well as a leader nationwide in training practitioners of family medicine. The impressive development of East Carolina has flowed from its embodiment of the school's ethic of service to the local community and, in the broadest context, the best interests of humanity.