The Magic in Changing Your Stars (Paperback) 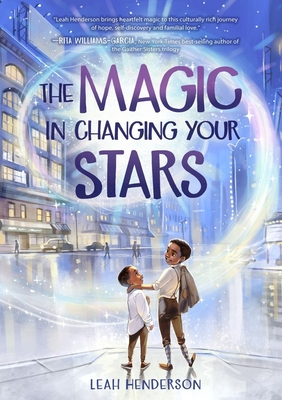 Journey back to 1939 Harlem in this time-travel adventure with an empowering message about believing in yourself and persevering. Eleven-year-old Ailey Benjamin Lane, a gifted dancer, is certain that he'll land the role of the Scarecrow in his school's production of The Wiz. But when a classmate overshadows him at auditions, a deflated Ailey confides in his Grampa that he is going to give up dancing. Not ready to give up on Ailey, Grampa shares a story from his past. As a young boy, Grampa gave up his dreams of tap dancing even after the unofficial Mayor of Harlem, Bill "Bojangles" Robinson, encouraged him to perform. Robinson also gifted him a special pair of tap shoes. A curious Ailey tries on the shoes and is instantly transported back to 1930s Harlem. There he meets a young street tap dancer and realizes it's his grandfather. Ailey thinks he can help the 12-year-old version of his Grampa face his fears, but he must tread lightly--if Ailey changes the past, can it affect his future, and will he ever make his way home? Featuring an all-Black cast of characters and many moments infused with Black culture and history, this is a time-travel adventure that has been waiting to be told.

Leah Henderson's writing is filled with stirring stories featuring Black heroes and heroines. She is the author of the middle-grade novel One Shadow on the Wall and Together We March: 25 Protest Movements That Marched into History. She lives in Washington, DC.