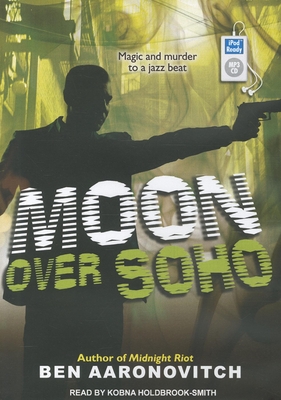 By Ben Aaronovitch, Kobna Holdbrook-Smith (Narrated by)
$29.99
OUT-OF-PRINT & UNAVAILABLE! (But email us to search for a used copy.)

This is book number 2 in the Peter Grant series.

Body and soul. The song. That's what London constable and sorcerer's apprentice Peter Grant first notices when he examines the corpse of Cyrus Wilkins, part-time jazz drummer and full-time accountant, who dropped dead of a heart attack while playing a gig at Soho's 606 Club. The notes of the old jazz standard are rising from the body-a sure sign that something about the man's death was not at all natural but instead supernatural.Body and soul-they're also what Peter will risk as he investigates a pattern of similar deaths in and around Soho. With the help of his superior officer, Detective Chief Inspector Thomas Nightingale, the last registered wizard in England, and the assistance of beautiful jazz aficionado Simone Fitzwilliam, Peter will uncover a deadly magical menace-one that leads right to his own doorstep and to the squandered promise of a young jazz musician: a talented trumpet player named Richard Lord Grant-otherwise known as Peter's dear old dad.

Ben Aaronovitch, a London-born writer who has worked on television series, is the author of "Midnight Riot," "Moon Over Soho," and "Whispers Under Ground."

Kobna Holdbrook-Smith is a Ghanaian-born, British actor who has appeared on stage, film, and television, including "Little Britain" and "Sirens." His audiobook narrations include "Blue Remembered Earth" by Alastair Reynolds and "The Memory of Love" by Aminatta Forna.

"Fresh and exciting and an absolute must buy." ---Saxon Bullock, SFX Magazine