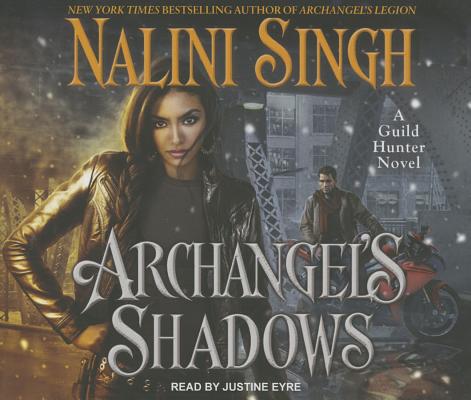 By Nalini Singh, Justine Eyre (Narrated by)
$39.99
UNAVAILABLE-Possible Reasons: Backordered, Out-of-Stock, or Out-of-Print (But email us to search for a copy.)

This is book number 7 in the Guild Hunter series.

In the wake of a brutal war, the archangel Raphael and his hunter consort, Elena, are dealing with the treacherously shifting tides of archangelic politics and the people of a battered but not broken city. The last thing their city needs is more death, especially a death that bears the eerie signature of an insane enemy archangel who cannot-should not-be walking the streets. This hunt must be undertaken with stealth and without alerting their people. It must be handled by those who can become shadows themselves. Ash is a gifted tracker and a woman cursed with the ability to sense the secrets of anyone she touches. But there's one man she knows all too well without a single instant of skin contact: Janvier, the dangerously sexy Cajun vampire who has fascinated and infuriated her for years. Now, as they track down a merciless killer, their cat-and-mouse game of flirtation and provocation has turned into a profound one of the heart. And this time, it is Ash's secret, dark and terrible, that threatens to destroy them both.Contains mature themes.

Nalini Singh is the "New York Times" bestselling author of dozens of novels, including the Psy/Changeling series and the Guild Hunter series. Visit her at nalinisingh.com.

Justine Eyre is a classically trained actress who has narrated over two hundred audiobooks. With a prestigious Audie Award and four "AudioFile" Earphones Awards under her belt, Justine is multilingual and is known for her great facility with accents. Her recent television credits include "Two and a Half Men" and "Mad Men."