Tomatoland, Third Edition: From Harvest of Shame to Harvest of Hope (Paperback) 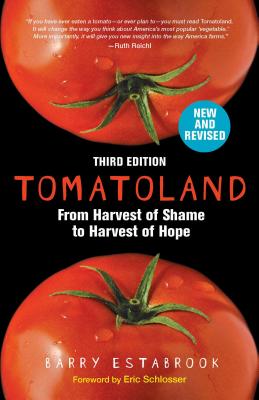 
Four entirely new chapters take up where the current edition leaves off to tell the story behind what president Bill Clinton calls “the most astonishing thing politically in the world we’re living in today.” Estabrook reveals how a rag-tag group of migrant tomato pickers in Florida convinced the world’s largest restaurant chains and food retailers to join forces to create a model for labor justice, and then took the necessary steps to make sure that the model really works, not only in Florida, but around the world.

James Beard Award-winning journalist Barry Estabrook was a contributing editor at Gourmet magazine for eight years, writing investigative articles about where food comes from. He was the founding editor of Eating Well magazine and has written for the New York Times Magazine, Reader's Digest, Men's Health, Audubon, and the Washington Post, and contributes regularly to The Atlantic Monthly's website. His work has been anthologized in the Best American Food Writing series, and he has been interviewed on numerous television and radio shows. He lives and grows tomatoes in his garden in Vermont.