The Siege of Delhi (Hardcover) 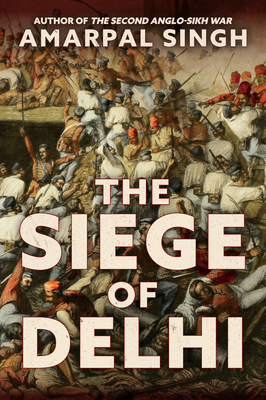 By Amarpal Singh
$47.95
UNAVAILABLE-Possible Reasons: Backordered, Out-of-Stock, or Out-of-Print (But email us to search for a copy.)

On 10 May 1857, the most serious threat to British supremacy in India appeared at Meerut, a large military station near Delhi. After months of increasing tension, sepoys of the 3rd Light Cavalry along with the 11th and 20th Native Infantry pointedly refused to use the new cartridges supplied to them. ‘The company Raj is over forever,’ declared the men to their British officers as they burned their cantonments, and the cry of ‘Dilhi chalo’ (Let's go to Delhi) was heard as they marched to the old Mughal capital. There the Mughal empire was declared as resurrected and the Emperor Bahadur Shah Zafar, an ageing pensioner of the British Government, affirmed as the ruler of all Hindustan once again. With the mutiny spreading rapidly, it became imperative for the British Government to recapture Delhi as the success or failure of the uprising hinged entirely on the possession of the city and the destruction of the rebel army. It would take three months of bloody fighting for the British Delhi Field Force to defeat the rebel sepoys and recapture the city, a period in which it became unclear quite who besieged whom. Singh comprehensively narrates the story from the uprising at Meerut to the climactic capture and sack of Delhi.

Amarpal Singh Sidhu was born in the Punjab, India. He spent over 20 years working in the software industry before turning to his real interest in military history and the exploration and analysis of battlefields. His first book "The First Anglo-Sikh War" has been well received. Amarpal has appeared and collaborated on history programs for several TV channels. He currently lives in London with his wife and two sons. His other interests include the later Roman Empire, Byzantium, the Ottoman Empire and World War Two.