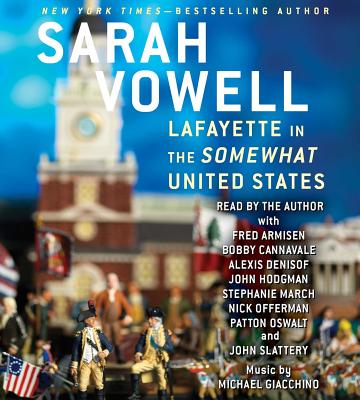 From the bestselling author of Assassination Vacation and Unfamiliar Fishes, a humorous account of the Revolutionary War hero Marquis de Lafayette—the one Frenchman we could all agree on—and an insightful portrait of a nation's idealism and its reality.

On August 16, 1824, an elderly French gentlemen sailed into New York Harbor and giddy Americans were there to welcome him. Or, rather, to welcome him back. It had been thirty years since the Revolutionary War hero the Marquis de Lafayette had last set foot in the United States, and he was so beloved that 80,000 people showed up to cheer for him. The entire population of New York at the time was 120,000.

Lafayette's arrival in 1824 coincided with one of the most contentious presidential elections in American history, Congress had just fought its first epic battle over slavery, and the threat of a Civil War loomed. But Lafayette, belonging to neither North nor South, to no political party or faction, was a walking, talking reminder of the sacrifices and bravery of the revolutionary generation and what they wanted this country to be. His return was not just a reunion with his beloved Americans, it was a reunion for Americans with their own astonishing singular past.

Lafayette in the Somewhat United States is a humorous and insightful portrait of the famed Frenchman, the impact he had on our young country, and his ongoing relationship with some of the instrumental Americans of the time, including George Washington, Alexander Hamilton, Thomas Jefferson, and many more.

Sarah Vowell is a contributing editor for public radio's This American Life and has written for Time, Esquire, GQ, Spin, Salon, McSweeneys, The Village Voice, and the Los Angeles Times. She is the author of Radio On, Take the Cannoli, and The Partly Cloudy Patriot. She lives in New York City.

John Slattery has starred on Broadway in Rabbit Hole, Betrayal, and Laughter on the 23rd Floor. Off-Broadway credits include Three Days of Rain (L.A. Critics Award, Drama Desk nom.), and The Lisbon Traviata. On television he has been seen in Ed, K Street, Sex & the City, and Will & Grace. Films include Flags of Our Fathers, Mona Lisa Smile, The Station Agent,Traffic, and Sleepers.

Sarah Vowell is a contributing editor for public radio's This American Life and has written for Time, Esquire, GQ, Spin, Salon, McSweeneys, The Village Voice, and the Los Angeles Times. She is the author of Radio On, Take the Cannoli, and The Partly Cloudy Patriot. She lives in New York City.

Patton Oswalt is the author of the New York Times bestseller Zombie Spaceship Wasteland. He has released four TV specials and four critically acclaimed comedy albums, including the Grammy-nominated My Weakness Is Strong. He put together the Comedians of Comedy tour and television series. Oswalt has also appeared on many television shows and in more than twenty films, including Young Adult, Big Fan, and Ratatouille. He lives in Los Angeles, California.