The Stars Now Unclaimed (The Universe After #1) (CD-Audio) 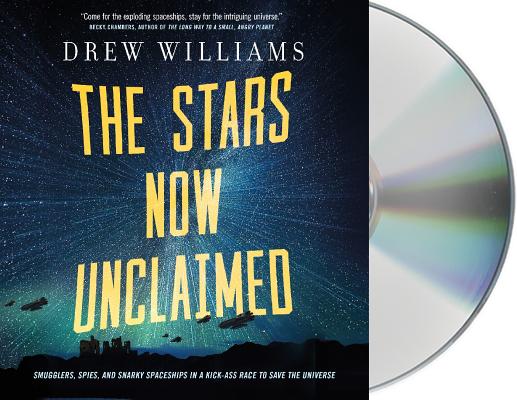 By Drew Williams, Brittany Pressley (Read by)
$57.99
OUT-OF-PRINT & UNAVAILABLE! (But email us to search for a used copy.)

This is book number 1 in the The Universe After series.

The Stars Now Unclaimed by Drew Williams is a fun, adventure-filled ride around a far-future galaxy. Think big guns, smugglers, epic space battles, and a telekinetic girl with all the gifts.

Jane Kamali is an agent for the Justified. Her mission: to recruit children with miraculous gifts in the hope that they might prevent the Pulse from once again sending countless worlds back to the dark ages.

Hot on her trail is the Pax--a collection of fascist zealots who believe they are the rightful rulers of the galaxy and who remain untouched by the Pulse.

Now Jane, a handful of comrades from her past, and a telekinetic girl called Esa must fight their way through a galaxy full of dangerous conflicts, remnants of ancient technology, and other hidden dangers.

Drew Williams has been a bookseller in Birmingham, Alabama since he was sixteen years old, when he got the job because he came in looking for work on a day when someone else had just quit. Outside of arguing with his coworkers about whether Moby Dick is brilliant (nope) or terrible (that one), his favorite part of the job is discovering new authors and sharing them with his customers.

Drew is the author of The Universe After series, including The Stars Now Unclaimed.

Brittany Pressley is an Audiofile Earphones award winning narrator in NYC. She has recorded over 100 titles and has received several nominations for American Library Association's annual list of Amazing Audiobooks for Young Adults. She is also an accomplished singer/songwriter and voice actress. Her voice can be heard on national and international TV and radio commercials as well as several animated series and video games. She is a proud graduate of Columbia University.

"[Brittany] Presley's narrative abilities bring each character to life, raising the emotional stakes as the gang faces horrific beasts and blazing guns in this pulse-pounding space opera. Science fiction fans will be riveted from the opening to the epic conclusion." -AudioFile, Earphones Award Winner