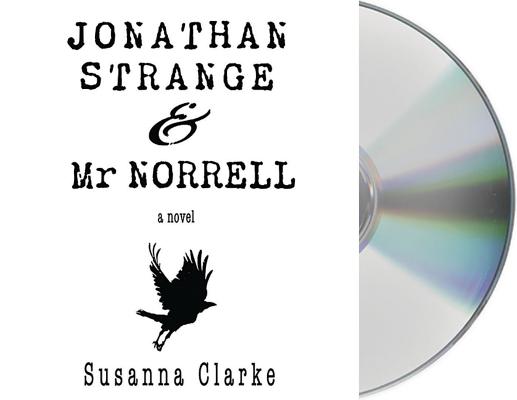 By Susanna Clarke, Simon Prebble (Read by)
$71.99
OUT-OF-PRINT & UNAVAILABLE! (But email us to search for a used copy.)

At the dawn of the nineteenth century, two very different magicians emerge to change England's history. In the year 1806, with the Napoleonic Wars raging on land and sea, most people believe magic to be long dead in England-until the reclusive Mr Norrell reveals his powers, and becomes a celebrity overnight.

Soon, another practicing magician comes forth: the young, handsome, and daring Jonathan Strange. He becomes Norrell's student, and they join forces in the war against France. But Strange is increasingly drawn to the wildest, most perilous forms of magic, straining his partnership with Norrell, and putting at risk everything else he holds dear.

Susanna Clarke's debut novel Jonathan Strange & Mr Norrell was first published in more than 34 countries and was longlisted for the Man Booker Prize and shortlisted for the Whitbread First Novel Award and the Guardian First Book Award. It won British Book Awards Newcomer of the Year, the Hugo Award and the World Fantasy Award in 2005. The Ladies of Grace Adieu, a collection of short stories, some set in the world of Jonathan Strange & Mr Norrell, was published by Bloomsbury in 2006. She lives in Derby shire.

Simon Prebble is a veteran British narrator and performer of considerable experience and talent.  He has enjoyed a varied career from acting in soap operas to performing Shakespeare's works.  One of AudioFile's Golden Voices, he has recorded over 200 audiobooks and his performances have received critical acclaim both in the U.S. and the U.K.  In 2009, Simon was named the Best Voice in Nonfiction & Culture.  Simon has garnered numerous Earphones Awards and read for such authors as Ian McEwan, Susanna Clarke, Peter Robinson, and Michael Crichton.

“What kind of magic can make an 800-page novel seem too short? Whatever it is, debut author Susanna Clarke is possessed by it.” —USA Today on Jonathan Strange & Mr Norrell

“Ravishing...A chimera of a novel that combines the dark mythology of fantasy with the delicious social comedy of Jane Austen into a masterpiece of the genre that rivals Tolkien...What really sets Jonathan Strange & Mr Norrell apart is its treatment of magic. Clarke's magic is a melancholy, macabre thing, confabulated out of snow and rain and mirrors and described with absolute realism ... Clarke has another rare faculty: she can depict evil ... [she] reaches down into fantasy's deep, dark, twisted roots, down into medieval history and the scary, Freudian fairy-tale stuff. Jonathan Strange & Mr Norrell reminds us that there's a reason fantasy endures: it's the language of our dreams. And our nightmares.” —Time

“Clarke's imagination is prodigious, her pacing is masterly and she knows how to employ dry humor in the service of majesty.” —The New York Times on Jonathan Strange & Mr Norrell

“Unquestionably the finest English novel of the fantastic written in the last seventy years. It's funny, moving, scary, otherworldly, practical and magical, a journey through light and shadow--a delight to read, both for the elegant and precise use of words, which Ms. Clarke deploys as wisely and dangerously as Wellington once deployed his troops, and for the vast sweep of the story, as tangled and twisting as old London streets or dark English woods. Closing Jonathan Strange & Mr Norrel after 800 pages, my only regret was that it wasn't twice the length.... From beginning to end, a perfect pleasure.” —Neil Gaiman, author of Anansi Boys, American Gods, and the Sandman series

“Immense, intelligent, inventive...Clarke is a restrained and witty writer with an arch and eminently readable style.” —Entertainment Weekly on Jonathan Strange & Mr Norrell

“Over the course of nearly 800 pages Clarke channels the world of Jane Austen, the Gothic tale, the Silver-Fork Society novel, military adventure à la Bernard Sharpe or Patrick O'Brian, romantic Byronism and Walter Scott's passion for the heroic Northern past. She orchestrates all these fictive elements consummately well...Many books are to be read, some are to be studied, and a few are meant to be lived in for weeks. Jonathan Strange & Mr. Norrell is of this last kind.” —The Washington Post on Jonathan Strange & Mr Norrell

“The most sparkling literary debut of the year.” —Salon on Jonathan Strange & Mr Norrell

“This 800-page work of fantasy--think Harry Potter sprinkled with the dust of Tolkien and Alasdair Gray--posits an extraordinary alternative history of England where magic, fairies, spirits and enchantments were once part of everyday life...This incredible work of the imagination, which took Clarke more than 10 years to write, ends all too soon.” —New York Post (four stars) on Jonathan Strange & Mr Norrell

“Here is a writer who remembers that true fairy tales carry a sting and the creatures themselves were never properly domesticated to the nursery. Her uncanny book is an object lesson in the pleasures--and risks--of enchantment.” —Village Voice on Jonathan Strange & Mr Norrell

“An instant classic, one of the finest fantasies ever written.” —Kirkus Reviews (starred review) on Jonathan Strange & Mr Norrell

“Wonderful. At almost 800 pages, it is an immense, densely plotted story, peopled with a a vast cast of extremely well-drawn characters, filled with unexpected events, ancient prophesies,varied and exotic settings, and all manner of human and inhuman conflict, and it is built one splendid scene upon the next.” —Toronto Globe and Mail on Jonathan Strange & Mr Norrell

“Jonathan Strange and Mr Norrell comes across as equal parts Jane Austen and Charles Dickens flavored with Rowling and Tolkien. It's inarguably one of the year's best and most original works.” —National Post (Canada)

“Combines the wit of Jane Austen with the subterranean spookiness of the works of Arthur Conan Doyle.” —Seattle Times on Jonathan Strange & Mr Norrell

“While Jonathan Strange is every bit as whimsical and playful as the Harry Potter books, it is also grave and upsetting, the very opposite of comforting children's entertainment...Clarke has delivered a book of universal truths and unexpectedly heartbreaking acuity.” —Fort Worth Star-Telegram

“Utterly enchanting. [Clarke's] union of historical fiction and fantasy is fresh, it is surprising, and it will appeal to those who want nothing more than to be carried away to a world crafted by a superb storyteller.” —Denver Post on Jonathan Strange & Mr Norrell

“Extraordinary...If Harry Potter is the kind of book that makes you want to be a kid again, Jonathan Strange & Mr Norrell is the kind of novel that will remind you that being an adult should be a whole lot more fun.” —Atlanta Journal-Constitution

“I found it absolutely compelling. The narrative drive is irresistible and I could not stop reading until I had finished it. The narrator's tone is beautifully judged. It's full of wonderfully deadpan humour and its reticence leaves the reader to make up his or her mind about the characters. I loved all the invented scholarship and was fascinated by the mixture of historical realism and utterly fantastic events. I almost began to believe that there really was a tradition of 'English magic' that I had not heard about. The author captures the period and its literary conventions with complete conviction. And a large part of the fun is seeing how an early nineteenth century novel copes with the impact of magic. It's an astonishing achievement. I can't think of anything that is remotely like it.” —Charles Palliser, author of The Quincunx, on Jonathan Strange & Mr Norrell