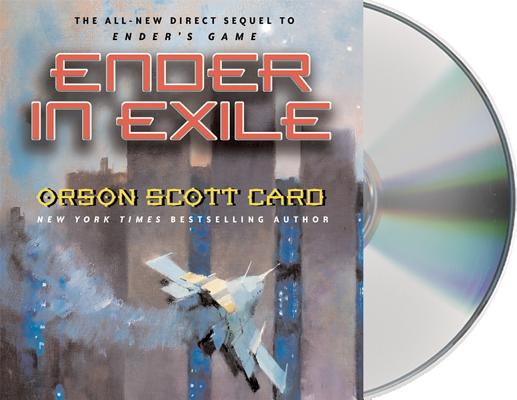 By Stefan Rudnicki (Read by), Orson Scott Card
$57.99
Email or call for price.

Orson Scott Card returns to his best-selling series with a new Ender novel, Ender in Exile.

At the close of Ender's Game, Andrew Wiggin – called Ender by everyone – is told that he can no longer live on Earth, and he realizes that this is the truth. He has become far more than just a boy who won a game: he is the Savior of Earth, a hero, a military genius whose allegiance is sought by every nation of the newly shattered Earth Hegemony. He is offered the choice of living in isolation on Eros, at one of the Hegemony's training facilities, but instead the twelve-year-old chooses to leave his home world and begin the long relativistic journey out to the colonies. With him went his sister Valentine, and the core of the artificial intelligence that would become Jane.

The story of those years has never been told… until now.

Stefan Rudnicki is an award winning audiobook narrator, director and producer. He was born in Poland and now resides in Studio City, California. He has narrated more than three hundred audiobooks and has participated in over a thousand as a writer, producer, or director. He is a recipient of multiple Audie Awards and AudioFile Earphones Awards as well as a Grammy Award, a Bram Stoker Award, and a Ray Bradbury Award. He received AudioFile’s award for 2008 Best Voice in Science Fiction and Fantasy. Along with a cast of other narrators, Rudnicki has read a number of Orson Scott Card's best-selling science fiction novels. He worked extensively with many other science fiction authors, including David Weber and Ben Bova. In reviewing the twentieth anniversary edition audiobook of Card’s Ender's Game, Publishers Weekly stated, "Rudnicki, with his lulling, sonorous voice, does a fine job articulating Ender's inner struggle between the kind, peaceful boy he wants to be and the savage, violent actions he is frequently forced to take." Rudnicki is also a stage actor and director.

“Cast members re-create characters and interact with each other smoothly, picking up threads from a number of books in the series. The dialogue moves quickly among them, and the production maintains a strong pace.” —AudioFile