The Song Rising: Limited Edition, Signed by the Author (The Bone Season) (Hardcover) 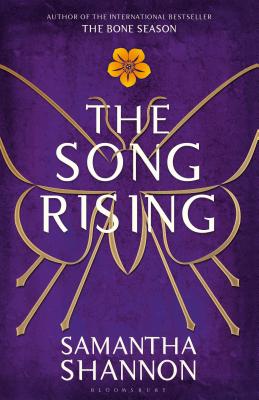 By Samantha Shannon
UNAVAILABLE AT THIS TIME (Possible reasons: Backordered, Out-of-Stock Indefinitely, or Print-on-Demand only)
OUT OF PRINT

Samantha Shannon was born in West London in 1991. She started writing at the age of fifteen and studied English language and literature at St. Anne's College, Oxford. The Bone Season, the first in a seven-book series, was a New York Times bestseller and the inaugural Today Book Club selection, and was named one of Amazon's Best Books of the Year. Film rights were acquired by the Imaginarium Studios and 20th Century Fox. The Mime Order, the second in the series, was also a New York Times bestseller. Her work has been translated into twenty-eight languages.

"Never less than captivating. A tantalizing, otherworldly adventure with imagination that burns like fire." - Kirkus Reviews

"Shannon's exploration of a futuristic, perilous Europe remains engaging and evocative . . . The narrative is fueled by a constant sense of tension, as well as both internal and external conflict." - Publishers Weekly

"Evocative, smart, and exciting . . . Shannon vividly and purposefully realizes each meticulously detailed setting, from London's underground to outposts in Scotland, while infusing her imaginative, passionate, and gripping saga with profound insights into humankind's long, bloody history of tyranny and the radiant ones who zealously fight for freedom and justice." - Booklist

"Fans will be rewarded with more character backstory, and new double agents on both sides of the insurgency . . . [The Song Rising] mirror[s] current debates on immigration, violence, and equality. It is within the descriptions of this clairvoyant world that Shannon’s writing shines." - Library Journal

"Shannon now has proven staying power. Her fans will be calling for more." - NPR.org on THE MIME ORDER

"Will solidify the series’ rightful place among the best of fantasy, sci-fi and dystopian fiction . . . [and] leave readers clamoring for book three." - ShelfAwareness on THE MIME ORDER

"Shannon has continued to build on this imagined world with intricacy, and Paige’s voice comes through to deliver a suspenseful story." - Washington Post on THE MIME ORDER

"An amazingly rich and unruly underworld . . . Paige makes great strides as a memorable character." - USA Today on THE MIME ORDER

"A dystopian thriller that delivers." - Salon on THE BONE SEASON

"A great imagination at work." - People on THE BONE SEASON