The Good, the Bad, and the Undead (Hollows (Blackstone Audio) #2) (Compact Disc) 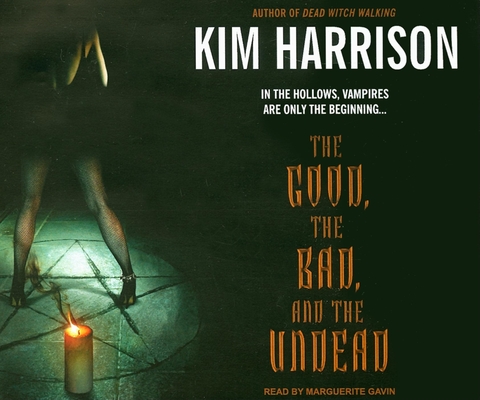 By Kim Harrison, Marguerite Gavin (Narrated by)
$39.99
UNAVAILABLE: Backordered or Out-of-Print (But email us to search for a used copy.)

This is book number 2 in the Hollows (Blackstone Audio) series.

Rachel Morgan is back and in more trouble than ever Fans of Laurell K. Hamilton and other vampire novels won't want to miss the second novel in Kim Harrison's addictive supernatural series. Former bounty hunter Rachel Morgan has it pretty good. She has left the corrupt Inderland Runner Service and started her own independent service. She's survived werewolves, shape-changing demons, bad-hair days, and sharing a church with her vampire roommate, Ivy. She even has a cute (if human) boyfriend-what more could a witch want? But living with a reformed vampire isn't all it's cracked up to be, particularly when your roommate's very bad ex-boyfriend wants her back and wouldn't mind you in the process. And especially when he's six feet of sheer supernatural seduction and you've got a demon mark that makes vampires literally hotter than hell. To save herself and Ivy, Rachel must confront the vampire master-and the dark secrets she's hidden even from herself.

Kim Harrison is the "New York Times" bestselling author of "Dead Witch Walking"; "The Good, the Bad, and the Undead"; and "A Fistful of Charms."

Marguerite Gavin has recorded over three hundred audiobooks in nearly every genre. A nominee for the prestigious Audie Award, she was won both "AudioFile" Earphones and "Publishers Weekly" Listen-Up Awards. "AudioFile" magazine says "Marguerite Gavin . . . has a sonorous voice, rich and full of emotion."