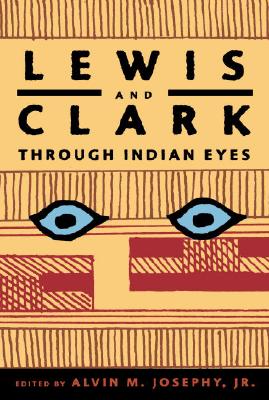 By Jr. Josephy, Alvin M. (Editor), Marc Jaffe (With)
UNAVAILABLE AT THIS TIME (Possible reasons: Backordered, Out-of-Stock Indefinitely, or Print-on-Demand only)
OUT OF PRINT

For the first time in the two hundred years since Lewis and Clark led their expedition from St. Louis to the Pacific, we hear the other side of the story—as we listen to nine descendants of the Indians whose homelands were traversed.

Among those who speak: Newspaper editor Mark Trahant writes of his childhood belief that he was descended from Clark and what his own research uncovers. Award-winning essayist and fiction writer Debra Magpie Earling describes the tribal ways that helped her nineteenth-century Salish ancestors survive, and that still work their magic today. Montana political figure Bill Yellowtail tells of the efficiency of Indian trade networks, explaining how axes that the expedition traded for food in the Mandan and Hidatsa villages of Kansas had already arrived in Nez Perce country by the time Lewis and Clark got there a few months and 1,000 miles later. Umatilla tribal leader Roberta Conner compares Lewis and Clark’s journal entries about her people with what was actually going on, wittily questioning Clark’s notion that the natives believed the white men “came from the clouds”—in other words, they were gods. Writer and artist N. Scott Momaday ends the book with a moving tribute to the “most difficult of journeys,” calling it, in the truest sense, for both the men who entered the unknown and those who watched, “a vision quest,” with the “visions gained being of profound consequence.”

Some of the essays are based on family stories, some on tribal or American history, still others on the particular circumstances of a tribe today—but each reflects the expedition’s impact through the prism of the author’s own, or the tribe’s, point of view.

Thoughtful, moving, provocative, Lewis and Clark Through Indian Eyes is an exploration of history—and a study of survival—that expands our knowledge of our country’s first inhabitants. It also provides a fascinating and invaluable new perspective on the Lewis and Clark expedition itself and its place in the long history of our continent.

Alvin M. Josephy, Jr., a leading historian of the American West, was the author of many award-winning books, including "The Patriot Chiefs, The Indian Heritage of America, Now That""the Buffalo's Gone, ""500""Nations, " and "A Walk Toward Oregon. "He was a vice president and editor of "American Heritage" magazine, the founding chairman of the board of trustees of the Smithsonian's National Museum of the American Indian, and president of the Western History Association. Josephy died in the fall of 2005, shortly after completing this book.

“A remarkable book…gives both the event and the era a fresh perspective.”
—The St. Louis Post-Dispatch

“Every story has two sides, and until now, the Indian point of view has scarcely been heard.”
—San Francisco Chronicle

“[A] compulsively readable book…should be required reading for all Americans.”
—Santa Cruz Sentinel