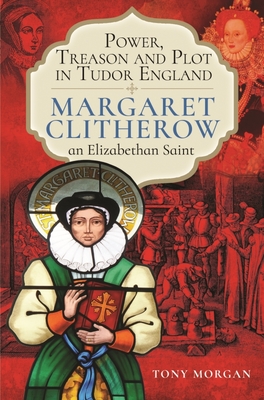 The Tudor period was notable for religious turmoil. Under Queen Elizabeth I, the slowly reforming Protestant Church of England finally gained a level of stability, but many people, from paupers to Lords, clung to Catholicism. Most crossed their fingers and attended Protestant services. Others, the 'recusants', remained defiant and refused to conform.

This book takes a fresh look into the life and death of one prominent Catholic recusant, Margaret Clitherow, and the wider events which shaped her story and that of many others. In 1970, Margaret was made a saint, one of the Forty Martyrs of England and Wales. All suffered a similar fate.

Elizabeth's government faced threats from multiple directions - poor harvests, disease, attempts at invasion and plots to replace the Queen with a Catholic monarch. In York, friction was growing between the Council of the North and the city Corporation. But for much of the population, life went on as normal. One well-to-do family in the city celebrated the birth of a daughter. Brought up for a time as a Protestant, Margaret Middleton eventually married a butcher, John Clitherow. They set up home in the Shambles and raised a family. Margaret's destiny changed when she embraced Catholicism.

In 1586, Margaret's stepfather was elected Lord Mayor of York. A few weeks later, Margaret was arrested for harboring Catholic priests. Coincidence, or something more sinister? What happened next was sensational. One woman taking on the northern authorities, the Church of England and assizes judiciary. Sentenced to death for refusing to make a plea in court, Margaret received a last-minute reprieve due to claims of her pregnancy, only for these to be rejected. Following Margaret's brutal execution, Queen Elizabeth is said to have apologized to the people of York.

With one martyr and no winner, Margaret's story is examined as a microcosm of Tudor life, a family tragedy of faith and betrayal, set against a backdrop of political power games, treason and plot.