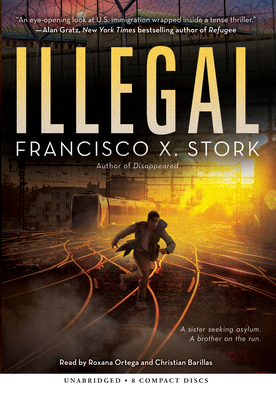 What does it mean to be illegal in the United States?
Life in Mexico is a death sentence for Emiliano and his sister Sara.

To escape the violent cartel that is after them, they flee across the border, seeking a better life in the United States and hoping that they can find a way to bring their pursuers to justice.

Sara turns herself over to the authorities to apply for asylum.

Emiliano enters the country illegally, planning to live with their father.

But now Sara is being held indefinitely in a detention facility, awaiting an asylum hearing that may never come, finding it harder every day to hold on to her faith and hope. Life for Emiliano is not easy either. Everywhere he goes, it's clear that he doesn't belong. And all the while, the cartel is closing in on them...

Emiliano sets off on a tense and dangerous race to find justice, but can he expose the web of crimes from his place in the shadows?

Award-winning author Francisco X. Stork's powerful follow-up to Disappeared delves with his usual sensitivity into the injustice that hides under the guise of the law in the United States. This is a timely and moving story that takes an unsparing look at the asylum process and the journey to find a new life in the US.

Francisco X. Stork is the author of Marcelo in the Real World, winner of the Schneider Family Book Award for Teens and the Once Upon a World Award; The Last Summer of the Death Warriors, which was named to the YALSA Best Fiction for Teens list and won the Amelia Elizabeth Walden Award; Irises; The Memory of Light, which received four starred reviews; and Disappeared, which also received four starred reviews and was named a Kirkus Best Book of the Year. He lives near Boston with his wife. You can find him on the web at franciscostork.com and @StorkFrancisco.