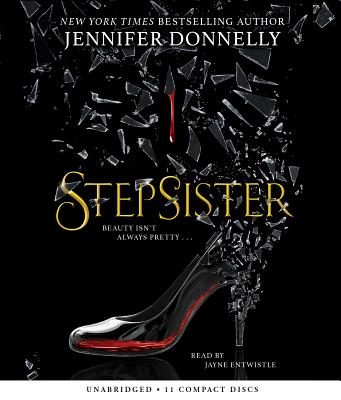 By Jennifer Donnelly
Email or call for price.
Backordered

* "Printz Honor winner Donnelly offers up a stunningly focused story that rips into the heart of the familiar fairy tale. Isabelle [is] a shattered but not unredeemable girl with a warrior's heart." -- Booklist, starred review
An instant New York Times bestseller!
Optioned for film by Lynette Howell Taylor, the producer of A Star is Born and Bruna Papandrea, producer of Big Little Lies
A Seventeen Best of the Year
Longlisted for the Carnegie Medal
A YALSA pick
A Bank Street College of Education Best Children's Book of the Year

Isabelle should be blissfully happy-she's about to win the handsome prince. Except Isabelle isn't the beautiful girl who lost the glass slipper and captured the prince's heart. She's the ugly stepsister who cut off her toes to fit into Cinderella's shoe . . . which is now filling with blood.

Isabelle tried to fit in. She cut away pieces of herself in order to become pretty. Sweet. More like Cinderella. But that only made her mean, jealous, and hollow. Now she has a chance to alter her destiny and prove what ugly stepsisters have always known: it takes more than heartache to break a girl.

Evoking the darker, original version of the Cinderella story, Stepsister shows us that ugly is in the eye of the beholder, and uses Jennifer Donnelly's trademark wit and wisdom to send an overlooked character on a journey toward empowerment, redemption . . . and a new definition of beauty.

Jennifer Donnelly is the author of A Northern Light, which was awarded a Printz Honor and a Carnegie Medal;Revolution (named a Best Book by Amazon, Kirkus Reviews, School Library Journal, and the Chicago Public Library, and nominated for a Carnegie Medal); the Deep Blue series; and many other books for young readers, including Lost in a Book, which spent more than 20 weeks on the New York Times bestseller list. She lives in New York's Hudson Valley.

Praise for Stepsister:
* "Printz Honor winner Donnelly offers up a stunningly focused story that rips into the heart of familiar fairy tale. Isabelle [is] a shattered but not unredeemable girl with a warrior's heart." -- Booklist, starred review

"This is another needed voice exposing cultural myths that suffocate girls in the name of likability and pit them against one another in the name of beauty." -- Bulletin of the Center for Children's Books

"Isabelle's emotional and triumphant journey of self-realization proves that beauty can be found in so much more than just a pretty face . . . A breathlessly exciting and utterly satisfying fairy tale." -- Kirkus Reviews

"Focusing on beauty's many guises, what contributes to hatred and cruelty, and people's power to take charge of their destinies, the retold fairy tale advocates autonomy and empowerment." -- Publishers Weekly