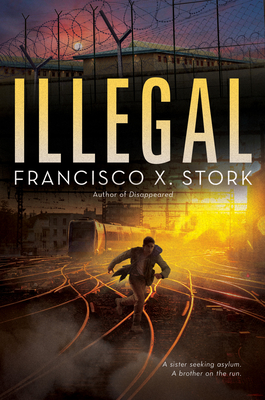 What does it mean to be illegal in the United States?
Life in Mexico is a death sentence for Emiliano and his sister Sara.

To escape the violent cartel that is after them, they flee across the border, seeking a better life in the United States and hoping that they can find a way to bring their pursuers to justice.

Sara turns herself over to the authorities to apply for asylum.

Emiliano enters the country illegally, planning to live with their father.

But now Sara is being held indefinitely in a detention facility, awaiting an asylum hearing that may never come, finding it harder every day to hold on to her faith and hope. Life for Emiliano is not easy either. Everywhere he goes, it's clear that he doesn't belong. And all the while, the cartel is closing in on them...

Emiliano sets off on a tense and dangerous race to find justice, but can he expose the web of crimes from his place in the shadows?

Award-winning author Francisco X. Stork's powerful follow-up to Disappeared delves with his usual sensitivity into the injustice that hides under the guise of the law in the United States. This is a timely and moving story that takes an unsparing look at the asylum process and the journey to find a new life in the US.

Francisco X. Stork is the author of Marcelo in the Real World, winner of the Schneider Family Book Award for Teens and the Once Upon a World Award; The Last Summer of the Death Warriors, which was named to the YALSA Best Fiction for Teens list and won the Amelia Elizabeth Walden Award; Irises; The Memory of Light, which received four starred reviews; and Disappeared, which also received four starred reviews and was named a Kirkus Best Book of the Year. He lives near Boston with his wife. You can find him on the web at franciscostork.com and @StorkFrancisco.

"Illegal is a compelling read infused with Francisco Stork's signature heart and thought-provoking ideas. With honesty and authenticity, it grapples with questions that we all ask ourselves about the moral inequities of immigration. Heartbreaking, yet hopeful." - Pam Muñoz Ryan, New York Times bestselling author of Echo and Esperanza Rising

"Illegal is timely and evocative. Once again, Francisco X. Stork challenges and expands our perceptions of empathy, justice, and what it means to be human." - Sharon Cameron, New York Times bestselling author of The Light in Hidden Places

* "A thrilling page-turner and as a powerful analysis of injustice happening within America's borders." - Booklist, starred review

* "A timely and touching novel that will surely engross fans of true crime stories. This title would be a welcome addition to young adult collections." - School Library Journal, starred review

* "A tense thriller elevated by Stork's nuanced writing and empathy for every character, including the villains-superb." - Kirkus Reviews, starred review

* "Stork beautifully explores the strong ties to one's home along with... the lure of power; and the strength necessary to dream, hope, and make positive change in such crushingly dangerous and difficult circumstances." - The Horn Book Magazine, starred review

* "Stork uses parallel storylines to flesh out the two protagonists, and then slowly brings them together to a harrowing climax. Not only does this result in a riveting story, it also highlights the harsh complexity of young Mexicans' lives. Readers will find this thrilling as well as eye-opening." - Booklist, starred review

Praise for The Memory of Light:

* "Stork further marks himself as a major voice in teen literature by delivering one of his richest and most emotionally charged novels yet." - Kirkus Reviews, starred review

Praise for Marcelo in the Real World:

* "Stork introduces ethical dilemmas, the possibility of love, and other 'real world' conflicts, all the while preserving the integrity of his characterizations and intensifying the novel's psychological and emotional stakes. Not to be missed." - Publishers Weekly, starred review

* "It is the rare novel that reaffirms a belief in goodness; rarer still is one that does so this emphatically." - The Horn Book Magazine, starred review

Praise for The Last Summer of the Death Warriors:

* "Stork's latest marks him as one of the most promising young adult authors of the new decade." - The Horn Book, starred review