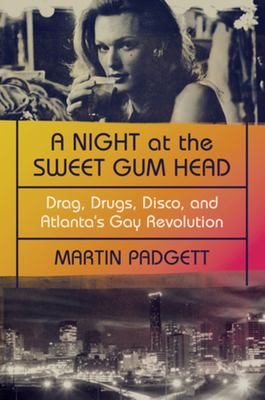 An electric and intimate story of 1970s gay Atlanta through its bedazzling drag clubs and burgeoning rights activism.

Coursing with a pumped-up beat, gay Atlanta was the South's mecca—a beacon for gays and lesbians growing up in its homophobic towns and cities. There, the Sweet Gum Head was the club for achieving drag stardom.

Martin Padgett evokes the fantabulous disco decade by going deep into the lives of two men who shaped and were shaped by this city: John Greenwell, an Alabama runaway who found himself and his avocation performing as the exquisite Rachel Wells; and Bill Smith, who took to the streets and city hall to change antigay laws. Against this optimism for visibility and rights, gay people lived with daily police harassment and drug dealing and murder in their discos and drag clubs. Conducting interviews with many of the major figures and reading through deteriorating gay archives, Padgett expertly re-creates Atlanta from a time when a vibrant, new queer culture of drag and pride came into being.

Martin Padgett has an MFA from the University of Georgia’s Grady College of Journalism and received a 2019 Lambda Literary Fellowship. He has written for Oxford American, Gravy, Details, and Business Week. He lives in Atlanta, Georgia.

A fizzy tale of civil rights, quaaludes and music…When stories such as these get told, it is a cause for celebration.
— Elon Green, The New York Times Book Review

A portrait of the wild and wooly Atlanta of the 1970s, when the crickets of a thousand back yards gave way to the pounding 4/4 beat of Donna Summer and Gloria Gaynor.
— Bo Emerson, The Atlanta Journal-Constitution

Baroque and beautiful, celebratory and tragic, Martin Padgett has written a deeply-researched and profoundly-important dispatch from a hinge moment in the history of the American South, when a man named Hot Chocolate danced with a man named R.C. Cola, dressed in a 'cluster of grapes and not much more,' and Atlanta emerged as a citadel of drag and a beacon of possibilities.
— John T Edge, author of The Potlikker Papers

This was my youth. I was there. I experienced it all. I was interviewed by Martin several times when he was writing the book. Bravo, Martin! You have captured it all beautifully!
— Leslie Jordan, actor

The 1970s was a decade of enormous consequence for queer communities across the nation. In A Night at the Sweet Gum Head, Martin Padgett brilliantly illuminates Atlanta as a microcosm of this social and sexual revolution. Conjuring a cavalcade of intimate personal portraits, deftly placed in vividly written panoramas of social change, he boldly brings to life the experiences of people in one night club in one city. A Night at the Sweet Gum Head captures the swirl and excitement of personal and community discovery that created the world in which we live today.

— Michael Bronski, author of A Queer History of the United States

I loved this book from the first moment I heard about it: an excavation of a hidden world brimming with character and humor and panache and courage (a friend of the author names his last two T-cells 'Itsy and Bitsy'), with a backdrop of 'drag, drugs, and disco'—told by a man once closeted in Birmingham, for whom Atlanta’s gay bars turned out to be the gates to freedom and to lasting love. In 'quiet drinking bars, fancy fern bars, glamorous lesbian bars, hot disco bars, and seedy hustler bars,' the gay revolution raged on, post-Stonewall, in the South, in the closing decades of the 20th century. Martin Padgett reports on the legendary folks just before his time who created safe spaces, welcoming spaces, dazzling spaces. We all know the name Stonewall; it’s time for us to learn about its Southern sister: the Sweet Gum Head.
— Melissa Fay Greene, author of The Underdogs