Isolate: A Novel in the Grand Illusion (Mass Market) 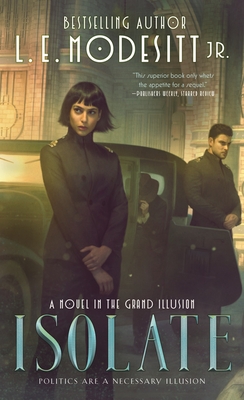 This is book number 1 in the The Grand Illusion series.

Something is about to give.

Steffan Dekkard is an isolate, one of the small percentage of people who are immune to the projections of empaths. As an isolate, he has been trained as a security specialist and he and his security partner Avraal Ysella, a highly trained empath are employed by Axel Obreduur, a senior Craft Minister and the de facto political strategist of his party.

When a respected Landor Councilor dies of “heart failure” at a social event, because of his political friendship with Obreduur, Dekkard and Ysella find that not only is their employer a target, but so are they, in a covert and deadly struggle for control of the government and economy.

Steffan is about to understand that everything he believed is an illusion.

L. E. Modesitt, Jr., is the bestselling author of the fantasy series The Saga of Recluce, Corean Chronicles, and the Imager Portfolio. His science fiction includes Adiamante, the Ecolitan novels, the Forever Hero Trilogy, and Archform: Beauty. Besides a writer, Modesitt has been a U.S. Navy pilot, a director of research for a political campaign, legislative assistant and staff director for a U.S. Congressman, Director of Legislation and Congressional Relations for the U.S. Environmental Protection Agency, a consultant on environmental, regulatory, and communications issues, and a college lecturer. He lives in Cedar City, Utah.

“This superior book only whets the appetite for a sequel.”—Publishers Weekly, starred review

“Readers will be caught up in Modesitt's world . . . anyone who likes to delve into the way worlds work will be riveted.”—Library Journal, starred review

“I couldn’t put it down.”—Amazing Stories

“Delicious with intrigue and artful revelations, Modesitt’s Isolate comes at you with top-drawer worldbuilding and compelling characters. Here we have a hot new gaslamp world fraught with political machinations that will keep you up reading into the night. Modesitt has always been great, so how does he keep getting better? Read Isolate and find out.” —Peter Orullian, author of The Unremembered

“Riveting.... A political story, told through fascinating characters.... I loved every minute.”—Reading Reality