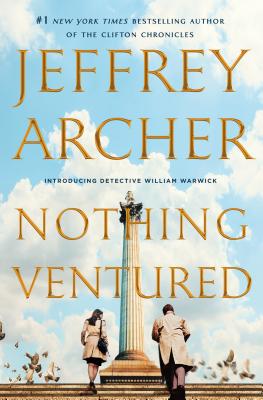 This is book number 1 in the William Warwick Novels series.

Comments:
This is a pleasingly British detective story about art forgery, museum heists, new loves, and antique deceptions.
For all that Jeffrey Archer has written, I had never read him until this book. I loved the introduction of the new character Warwick, as well as the 1979 London setting.
Read this for:

Nothing Ventured heralds the start of a brand new series in the style of Jeffrey Archer’s #1 New York Times bestselling Clifton Chronicles: introducing Detective William Warwick. But this is not a detective story, this is a story about the making of a detective . . .

William Warwick has always wanted to be a detective, and decides, much to his father’s dismay, that rather than become a lawyer like his father, Sir Julian Warwick QC, and his sister Grace, he will join London’s Metropolitan Police Force.

After graduating from university, William begins a career that will define his life: from his early months on the beat under the watchful eye of his first mentor, Constable Fred Yates, to his first high-stakes case as a fledgling detective in Scotland Yard’s arts and antiquities squad. Investigating the theft of a priceless Rembrandt painting from the Fitzmolean Museum, he meets Beth Rainsford, a research assistant at the gallery who he falls hopelessly in love with, even as Beth guards a secret of her own that she’s terrified will come to light.

While William follows the trail of the missing masterpiece, he comes up against suave art collector Miles Faulkner and his brilliant lawyer, Booth Watson QC, who are willing to bend the law to breaking point to stay one step ahead of William. Meanwhile, Miles Faulkner’s wife, Christina, befriends William, but whose side is she really on?

This new series introduces William Warwick, a family man and a detective who will battle throughout his career against a powerful criminal nemesis. Through twists, triumph and tragedy, this series will show that William Warwick is destined to become one of Jeffrey Archer’s most enduring legacies.

JEFFREY ARCHER was educated at Oxford University. He served five years as a Member of Parliament in the House of Commons and has served twenty-seven years as a Member of the House of Lords. Now published in 97 countries and more than 37 languages, all of his novels and short story collections—including Kane & Abel, Only Time Will Tell and This Was a Man—have been international bestsellers. Jeffrey is married with two sons and three grandchildren, and lives in London, Cambridge and Majorca.

Advance Praise for Nothing Ventured

"An expert juggling act that ends with not one but two intercut trials. More, please." —Kirkus Reviews

"A fully realized character, the intelligent Warrick is ambitious but naive with a lot to learn. He’s surrounded by a distinctive cast of family, colleagues, and villains, while a well-placed romantic situation fills out a near-perfect hand. The final section dealing with dueling courtroom dramas brings genuine suspense to a relatively bloodless, but thoroughly gripping, tale. Archer reinforces his position as a master storyteller.” —Publishers Weekly

"Archer has a real gift for family sagas, and here, with Warwick, he’s launching what promises to be a series just as riveting as the Clifton Chronicles . . . Readers who know Warwick from the Chronicles will be interested to learn more about him (such as exactly how he acquired the nemesis who haunts his every move later in his career), but previous knowledge of the character is certainly not necessary to enjoy this first in what we hope will be a long series.” —Booklist

"A story that builds in intensity . . . Archer’s numerous fans will appreciate another dramatic, character-driven mystery set in the world of art, police work, and court trials.” —Library Journal (starred review)