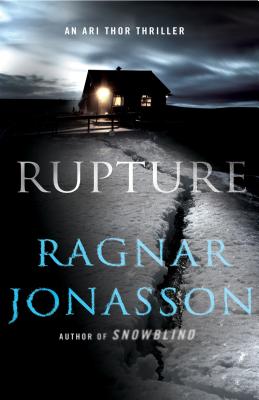 This is book number 4 in the The Dark Iceland Series series.

A huge bestseller in England, France, and Australia, the fourth book in the Ari Thor thriller series from a spectacular new crime writer.

Hailed for combining the darkness of Nordic Noir with classic mystery writing, author Ragnar Jonasson’s books are haunting, atmospheric, and complex. Rupture, the latest Ari Thór thriller, delivers another dark mystery that is chillingly stunning with its complexity and fluidity.

Young policeman Ari Thór tries to solve a 50-year-old murder when new evidence surfaces. But the case proves difficult in a town where no one wants to know the truth, where secrets are a way of life. He's assisted by Ísrún, a news reporter in Reykjavik who is investigating an increasingly chilling case of her own. Things take a sinister turn when a child goes missing in broad daylight. With a stalker on the loose, and the town in quarantine, the past might just come back to haunt them.

RAGNAR JONASSON is an international number one bestselling author who has sold over three million books in thirty-six countries worldwide. His books include the Dark Iceland series and the Hulda series. Jonasson was born in Reykjavik, Iceland, where he also works as an investment banker and teaches copyright law at Reykjavik University. He has previously worked on radio and television, including as a TV news reporter for the Icelandic National Broadcasting Service, and, since the age of seventeen, has translated fourteen of Agatha Christie's novels. Ragnar is the co-founder of the Reykjavik international crime writing festival Iceland Noir. His critically acclaimed international bestseller The Darkness is soon to be a major TV series, and Outside is soon to be a feature film. Jonasson lives in Reykjavik with his wife and two daughters.

Ragnar Jonasson hailed as one of "the heirs to the Agatha Christie crown" by The Daily Telegraph (UK).

Praise for RUPTURE:
"Fans of the Ari Thór series, which began with Snowblind, know that they can depend on Ragnar Jónasson to tie everything up in a beautiful Agatha Christie-esque bow." —Shelf Awareness

Praise for BLACKOUT:
“Easily the best yet… A chiller of a thriller whose style and pace are influenced by Jonasson's admiration for Agatha Christie. It's good enough to share shelf space with the works of Yrsa Sigurdardottir and Arnaldur Indridason, Iceland's crime novel royalty."--The Washington Post

“Beautifully written and elegantly paced with a plot that only gradually becomes visible, as if the reader had been staring into the freezing fog waiting for shapes to emerge." —The Guardian (UK)

“Jonasson’s writing is a masterful reinvention of the Golden Age classic style, both contemporary and timeless… enclosed by the poetic beauty of the location” —Crime Review


Praise for NIGHTBLIND:
“Story’s got me gripped but even more satisfying is how the characters are never just there as pawns in the plot.”—Ian Rankin, author of the Inspector Rebus series

“The final surprise carries a real shock; and of course the advent of the Icelandic winter is likely to chill hearts even below the Arctic Circle.”—Kirkus Reviews

"A unique Nordic Noir of the first order."—BookPage

"Jonasson delights in playing with the expectations of his audience, pulling the carpet out from under us on more than one occasion. Pure entertainment."—Mystery Scene

“There will be no better way to start the year than by reading Nightblind by Ragnar Jonasson…Jonasson’s books have breathed new life into Nordic noir.”—Sunday Express

“Nightblind…certainly lives up to the promise of its predecessor…this is an atmospheric portrayal of a claustrophobic place where everyone is connected…economical and evocative prose, as well as some masterful prestidigitation…”—The Guardian

Praise for SNOWBLIND:
"Jónasson skillfully alternates points of view and shifts of time...The action builds to a shattering climax."—Publishers Weekly (boxed and starred)

“A modern Icelandic take on an Agatha Christie-style mystery, as twisty as any slalom...” —Ian Rankin, author of the Inspector Rebus series

“This classically crafted whodunit holds up nicely, but Jónasson’s true gift is for describing the daunting beauty of the fierce setting, lashed by blinding snowstorms that smother the village in “a thick, white darkness” that is strangely comforting.”—New York Times Book Review

“A chiller of a thriller whose style and pace are influence by Jónasson’s admiration for Agatha Christie. It’s good enough to share shelf space with the works of Yrsa Sigurdardottir and Arnaldur Indridason, Iceland’s crime novel royalty.”—The Washington Post, “Best Mysteries and Thrillers to Read in January”

“In this debut novel, Jónasson has taken the locked-room mystery and transformed it into a dark tale of isolation and intrigue that will keep readers guessing until the final page.”—Library Journal Xpress

“Jónasson spins an involving tale of small-town police work that vividly captures the snowy setting that so affects the rookie cop. Iceland noir at its moodiest”—Booklist

“What sets Snowblind apart is the deep melancholy pervading the characters. Most of them, including Ari, have suffered a tragic loss. That's bad for them, but along with the 24-hour darkness closing in, it makes for the best sort of gloomy storytelling.” —Chicago Tribune

“Perfectly capturing the pressures of rural life and the freezing, deadly Icelandic winter, Snowblind will keep readers on the edge of their seats--preferably snuggled beneath a warm blanket.”—Shelf Awareness

“A real find. I loved it. The turns of the plot are clever and unexpected, and Ari is a wonderful character to spend time with."—Mystery Scene

“Snowblind has the classic red herrings, plot twists and surprises that characterize the best of Christie’s work. Jónasson’s latest is nicely done and simply begs for a sequel.”—BookPage

“Seductive … an old-fashioned murder mystery with a strong central character and the fascinating background of a small Icelandic town cut off by snow. Ragnar does claustrophobia beautifully.” —Ann Cleeves, author of the Vera Stanhope and Shetland Island series

“A dazzling novel ... Thór is a welcome addition to the pantheon of Scandinavian detectives. I can’t wait until the sequel!” —William Ryan, author of the Captain Alexei Korolev series

"A classic whodunit with a vividly drawn protagonist and an intriguing, claustrophobic setting, Snowblind dazzles like sunlight on snow, chills like ice and confirms the growing influence of Scandinavian crime fiction." -Richmond Times-Dispatch

"A satisfying mystery where all the pieces, in the end, fall together."- Dallas Morning News

“An isolated community, subtle clueing, clever mis-direction and more than a few surprises combine to give a modern-day, golden age whodunit. Well Done! I look forward to the next in the series.”—Dr. John Curran, author of Agatha Christie’s Secret Notebooks

“An intricately plotted crime novel, Snowblind is a remarkable debut. Ragnar Jonasson has delivered an intelligent whodunit that updates, stretches, and redefines the locked-room mystery format. A tense and thrilling book that paints a vivid portrait of a remote town in long-term decline, facing the chilling aftershocks of the global financial meltdown.”—EuroDrama

"Jónasson has produced a tense and convincing thriller; he is a welcome addition to the roster of Scandi authors, and I really look forward to his next offering." —Mystery People

"Snowblind is a dark, claustrophobic read, and Jónasson evokes perfectly the 24-hour darkness, the biting cold, the relentless snow and fear of a killer on the loose in a village suddenly cut off by an avalanche. His crisp, bleak prose is an exemplary lesson in how to create atmosphere without producing over-inflated books that would cause their own avalanche if dropped."—Crime Review

"Ragnar Jónasson is a new name in the crime writing genre and I urge anyone who is a fan of Nordic crime noir to rush out and get yourself a copy of Snowblind this you will want to add to your collection. It is really that good."—The Last Word-Book Review

"If Arnaldur is the King and Yrsa the Queen of Icelandic crime fiction, then Ragnar is surely the Crown Prince … more please!" —EuroCrime