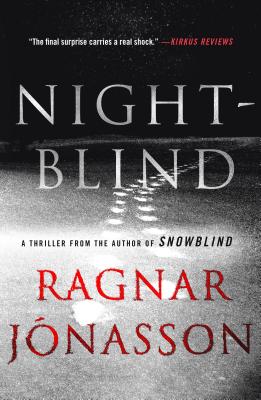 This is book number 2 in the The Dark Iceland Series series.

Chilling and complex, Nightblind is an extraordinary thriller from Ragnar Jonasson, an undeniable new talent.

Ari Thor Arason is a local policeman who has an uneasy relationship with the villagers in an idyllically quiet fishing village in Northern Iceland—where no one locks their doors.

The peace of this close-knit community is shattered by a murder. One of Ari’s colleagues is gunned down at point-blank range in the dead of night in a deserted house. With a killer on the loose and the dark Arctic waters closing in, it falls to Ari Thor to piece together a puzzle that involves a new mayor and a psychiatric ward in Reykjavik. It becomes all too clear that tragic events from the past are weaving a sinister spell that may threaten them all.

RAGNAR JONASSON is an international number one bestselling author who has sold over three million books in thirty-six countries worldwide. His books include the Dark Iceland series and the Hulda series. Jonasson was born in Reykjavik, Iceland, where he also works as an investment banker and teaches copyright law at Reykjavik University. He has previously worked on radio and television, including as a TV news reporter for the Icelandic National Broadcasting Service, and, since the age of seventeen, has translated fourteen of Agatha Christie's novels. Ragnar is the co-founder of the Reykjavik international crime writing festival Iceland Noir. His critically acclaimed international bestseller The Darkness is soon to be a major TV series, and Outside is soon to be a feature film. Jonasson lives in Reykjavik with his wife and two daughters.

Ragnar Jonasson hailed as one of "the heirs to the Agatha Christie crown" by The Daily Telegraph (UK).

“Story’s got me gripped but even more satisfying is how the characters are never just there as pawns in the plot.”—Ian Rankin

"The ending is a satisfying surprise. But what really makes Nightblind stand out is its vivid cast of characters, whose fears, ambitions, rivalries, and longings are movingly universal."—Oprah.com

"The final surprise carries a real shock; and of course the advent of the Icelandic winter is likely to chill hearts even below the Arctic Circle."—Kirkus Reviews

"A unique Nordic Noir of the first order."—BookPage

"Jonasson delights in playing with the expectations of his audience, pulling the carpet out from under us on more than one occasion. Pure entertainment."—Mystery Scene

“There will be no better way to start the year than by reading Nightblind by Ragnar Jonasson…Jonasson’s books have breathed new life into Nordic noir.”—Sunday Express

“Nightblind…certainly lives up to the promise of its predecessor…this is an atmospheric portrayal of a claustrophobic place where everyone is connected…economical and evocative prose, as well as some masterful prestidigitation…”—The Guardian

"Ragnar Jonasson has written a spellbinding novel, with deep insights into the many conflicted characters in the book."—Marilyn's Mystery Reads

"This novel is an effective melding of classic village mystery with contemporary Nordic noir."—Reviewing the Evidence

“A modern Icelandic take on an Agatha Christie-style mystery, as twisty as any slalom...” —Ian Rankin

“This classically crafted whodunit holds up nicely, but Jónasson’s true gift is for describing the daunting beauty of the fierce setting, lashed by blinding snowstorms that smother the village in “a thick, white darkness” that is strangely comforting.”—New York Times Book Review

"Jónasson skillfully alternates points of view and shifts of time...The action builds to a shattering climax."—Publishers Weekly (boxed and starred)

“A chiller of a thriller whose style and pace are influence by Jónasson’s admiration for Agatha Christie. It’s good enough to share shelf space with the works of Yrsa Sigurdardottir and Arnaldur Indridason, Iceland’s crime novel royalty.”—The Washington Post, “Best Mysteries and Thrillers to Read in January”

“In this debut novel, Jónasson has taken the locked-room mystery and transformed it into a dark tale of isolation and intrigue that will keep readers guessing until the final page.”—Library Journal Xpress

“Jónasson spins an involving tale of small-town police work that vividly captures the snowy setting that so affects the rookie cop. Iceland noir at its moodiest”—Booklist

“What sets Snowblind apart is the deep melancholy pervading the characters. Most of them, including Ari, have suffered a tragic loss. That's bad for them, but along with the 24-hour darkness closing in, it makes for the best sort of gloomy storytelling.” —Chicago Tribune

“Perfectly capturing the pressures of rural life and the freezing, deadly Icelandic winter, Snowblind will keep readers on the edge of their seats--preferably snuggled beneath a warm blanket.”—Shelf Awareness

“A real find. I loved it. The turns of the plot are clever and unexpected, and Ari is a wonderful character to spend time with."—Mystery Scene

“Snowblind has the classic red herrings, plot twists and surprises that characterize the best of Christie’s work. Jónasson’s latest is nicely done and simply begs for a sequel.”—BookPage

“If a Golden Age crime novel was to emerge from a literary deep freeze then you’d hope it would read like this.” —Craig Robertson

“Seductive … an old-fashioned murder mystery with a strong central character and the fascinating background of a small Icelandic town cut off by snow. Ragnar does claustrophobia beautifully.” —Ann Cleeves