The New Right: A Journey to the Fringe of American Politics (Hardcover) 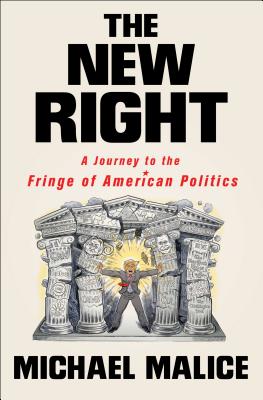 The definitive firsthand account of the movement that permanently broke the American political consensus.

What do internet trolls, economic populists, white nationalists, techno-anarchists and Alex Jones have in common? Nothing, except for an unremitting hatred of evangelical progressivism and the so-called “Cathedral” from whence it pours forth.

Contrary to the dissembling explanations from the corporate press, this movement did not emerge overnight—nor are its varied subgroups in any sense interchangeable with one another. As united by their opposition as they are divided by their goals, the members of the New Right are willfully suspicious of those in the mainstream who would seek to tell their story. Fortunately, author Michael Malice was there from the very inception, and in The New Right recounts their tale from the beginning.

Malice provides an authoritative and unbiased portrait of the New Right as a movement of ideas—ideas that he traces to surprisingly diverse ideological roots. From the heterodox right wing of the 1940s to the Buchanan/Rothbard alliance of 1992 and all the way through to what he witnessed personally in Charlottesville, The New Right is a thorough firsthand accounting of the concepts, characters and chronology of this widely misunderstood sociopolitical phenomenon.

Today’s fringe is tomorrow’s orthodoxy. As entertaining as it is informative, The New Right is required reading for every American across the spectrum who would like to learn more about the past, present and future of our divided political culture.

Michael Malice is the author of Dear Reader: The Unauthorized Autobiography of Kim Jong Il and the subject of Harvey Pekar’s graphic novel Ego & Hubris. He frequently appears as a commentator on various television programs and podcasts. He currently hosts both Night Shade at Compound Media and “YOUR WELCOME” at the GaS Digital Network.

"Michael Malice is a smug Jew who comes from Russia. I don't like him because he beats me in arguments and makes me look like an idiot." —Gavin McInnes, Co-Founder of Vice Magazine

"The Willy Wonka of politics!" —Dave Rubin, Host of The Rubin Report

"Everyone is reading The New Right and so should you." —Jack Posobiec, Host for One America News Network