The Short, the Long and the Tall: Short Stories (Hardcover) 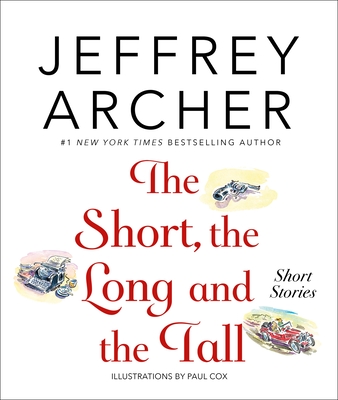 New York Times number one bestselling author Jeffrey Archer is a master of the short-story form, creating classic tales beloved by his fans. Now the award-winning writer joins forces with renowned illustrator Paul Cox to re-imagine twenty of his most popular and fêted short stories alongside beautifully rendered watercolor illustrations in The Short, The Long and the Tall.

Find out what happens to the hapless young detective from Naples who travels to an Italian hillside town to solve a murder and ends up falling in love; and the pretentious schoolboy whose discovery of the origins of his father’s wealth changes his life forever. Revel in the stories of the woman who dares to challenge the men at her Ivy League university during the 1930s, and another young woman who thumbs a lift and has an encounter she will never forget. Discover the haunting story about four men whose characters are tested to the point of death. Finally, a short parable about how pointless war is, and how decent people are caught up in the crossfire of their leaders’ ambitions.

This will be a must-buy for dedicated fans of the work of both author and illustrator, and includes the following short stories:

Never Stop on the Motorway
Cheap At Half the Price
Who Killed the Mayor?
It Can’t Be October Already
Stuck on You
The Grass is Always Greener
The Queen’s Birthday Telegram
Clean Sweep Ignatius
The First Miracle
Caste Off
A Wasted Hour
Just Good Friends
Christina Rosenthal
A Gentleman and a Scholar
The Road To Damascus
Old Love
A Good Toss To Lose
One Man’s Meat
Endgame
Confession

JEFFREY ARCHER was educated at Oxford University. He served five years as a Member of Parliament in the House of Commons and has served twenty-seven years as a Member of the House of Lords. Now published in 97 countries and more than 37 languages, all of his novels and short story collections—including Kane & Abel, Only Time Will Tell and This Was a Man—have been international bestsellers. Jeffrey is married with two sons and three grandchildren, and lives in London, Cambridge and Majorca.

PAUL COX studied illustration at Camberwell School of Art and the Royal College of Art. Since his graduation in 1982 he has worked as a freelance illustrator and painter, involving himself in an extraordinary number and variety of projects including a 50th anniversary version of Gerald Durrell’s classic My Family and Other Animals. Readers of newspapers and magazines on both sides of the Atlantic will instantly recognize his wonderfully fresh images from the Daily Telegraph, Country Life, The Spectator, Sunday Times Magazine, Punch, The Times, Blueprint magazine, Vanity Fair and Esquire. His work is frequently exhibited at the Chris Beetles gallery in London, and Paul has built up a wide following for his unique and rhythmical style.