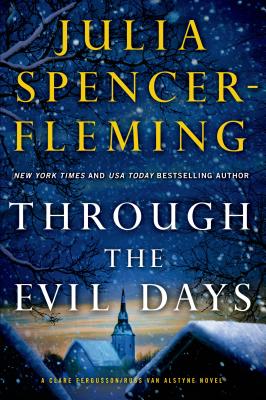 This is book number 8 in the Fergusson/Van Alstyne Mysteries series.

“Police chief Russ Van Alstyne and Episcopal minister Claire Fergusson attempt to take their long-awaited honeymoon, only to become embroiled in a murder and child kidnapping case in upstate New York. A blizzard cuts off most normal means of communication as well as the roads, and the clock ticks as they attempt to locate the missing girl who won't survive if she doesn't get her medication in time. A wonderful addition to this outstanding series!”
— Connie Brooks, Battenkill Books, Cambridge, NY

In Through the Evil Days, New York Times bestselling author Julia Spencer-Fleming raises the stakes for Russ and Clare, putting their new marriage, their unborn child, a missing teen, and their very own lives on the line.

On a frigid January night, Chief of Police Russ Van Alstyne and Reverend Clare Fergusson are called to the scene of a raging fire. The extent of the tragedy isn't known until the next day, when the charred remains of a man and woman are recovered—along with evidence showing they were shot execution style.

The last thing Russ needs are two potential homicides. He's struggling with the prospect of impending fatherhood, and his new wife is not at all happy with his proposal for their long-delayed honeymoon: a week ice-fishing at a remote Adirondack lake.

St. Alban's Church is still in turmoil over the Reverend Clare Fergusson's news that she's five and a half months pregnant—but only two and a half months married. Worried her post-deployment drinking and drug use may have damaged the baby, she awaits the outcome of the bishop's investigation into her "unpriestly" behavior: a scolding, censure, or permanent suspension.

Officer Hadley Knox is having a miserable January as well. Her on-again, off-again lover, Kevin Flynn, has seven days to weigh an offer from the Syracuse Police Department that might take him half a state away. And her ex-husband's in town—threatening to take custody of their kids unless Hadley pays him off with money she doesn't have.

When Hadley discovers that the dead couple fostered an eight-year-old girl who was a recent liver donee, the search for the killer takes on a new and terrible urgency. With no access to immunosuppressant drugs, transplant rejection will kill the girl in a matter of days.

As a deadly ice storm downs power lines and immobilizes roads, Russ and Clare search desperately for the truth about the missing child, but the hunters will become the hunted when they are trapped in the cabin beside the frozen lake and stalked through the snowbound woods by a killer.

“This novel....is among the best in the series, combining steady action with complex, sympathetic characters and an immersive setting. Clare and Russ are an unusual but fitting pair, and Spencer-Fleming perfectly captures the contrasting emotions of love and frustration that define marriage. Readers seeking tales of city crime reaching small towns will love the well-crafted setting and story but shouldn't expect a cozy; there's plenty of grit here.” —Booklist (starred review)

“Through the Evil Days is both a powerful psychological thriller and a pulse-pounding action adventure that shows us once again why Julia Spencer-Fleming is one of our finest writers of suspense.” —Joseph Finder, New York Times bestselling author of Paranoia and Buried Secrets

“Thrilling, chilling and the suspense is killing.” —Val McDermid

“Through the Evil Days is an exceptionally fine addition to an already accomplished series. Julia Spencer-Fleming is one of mystery fiction's treasures.” —John Connolly

“It's amazing Spencer-Fleming manages to carry off a layered plot that opens with an arson, a double homicide and a kidnapping and expands into a broader picture of the drug use, domestic violence and desolation squeezing the life out of this small town.” —Marilyn Stasio, New York Times Book Review

“Through the Evil Days is deep, rich, and compelling--and as chilling as hell. Julia Spencer-Fleming has written a masterful novel.” —Meg Gardiner, author of The Shadow Tracer

“Through the Evil Days is a treat for hardcore Spencer-Fleming fans and newcomers alike. It leaves only one question unanswered: how long do we have to wait for the next one?” —New York Times bestselling author Lauren Willig

“A story of greed, betrayal, and wounded love, One Was a Soldier left me entertained, satisfied, and a shade wiser about the cost of war.” —John Hart, New York Times bestselling author, on One Was a Soldier

“Spencer-Fleming's fans who have been waiting eagerly for her latest won't be disappointed; this series, as intelligent as it is enthralling, just keeps getting better.” —Booklist (starred review) on One Was a Soldier

“An absolute tour de force! Both a superb murder mystery and a gripping examination of the suffering of returning soldiers.” —Louise Penny, New York Times bestselling author, on One Was a Soldier

“Spencer-Fleming knows her craft, which lends authority to the subsequent investigation. But it's character that really counts here.” —The New York Times Book Review on One Was a Soldier

“In the hands of a lesser writer, this novel would not fly, but Spencer-Fleming carries it off and concludes with a believable resolution. Outstanding.” —Library Journal (starred review) on One Was a Soldier

“Spencer-Fleming's most ambitious book yet - think The Best Years of Our Lives with corpses....fans will continue to be impressed by her resourceful determination never to tell the same story twice.” —Booklist (starred review) on One Was a Soldier