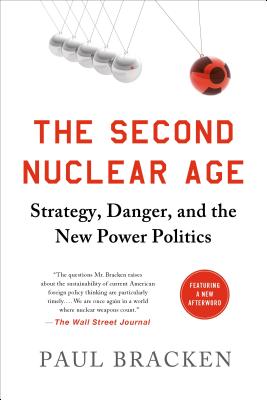 A leading international security strategist offers a compelling new way to "think about the unthinkable."

The cold war ended more than two decades ago, and with its end came a reduction in the threat of nuclear weapons—a luxury that we can no longer indulge. It's not just the threat of Iran getting the bomb or North Korea doing something rash; the whole complexion of global power politics is changing because of the reemergence of nuclear weapons as a vital element of statecraft and power politics. In short, we have entered the second nuclear age.

In this provocative and agenda-setting book, Paul Bracken of Yale University argues that we need to pay renewed attention to nuclear weapons and how their presence will transform the way crises develop and escalate. He draws on his years of experience analyzing defense strategy to make the case that the United States needs to start thinking seriously about these issues once again, especially as new countries acquire nuclear capabilities. He walks us through war-game scenarios that are all too realistic, to show how nuclear weapons are changing the calculus of power politics, and he offers an incisive tour of the Middle East, South Asia, and East Asia to underscore how the United States must not allow itself to be unprepared for managing such crises.

Frank in its tone and farsighted in its analysis, The Second Nuclear Age is the essential guide to the new rules of international politics.

Paul Bracken is the author of Fire in the East and The Command and Control of Nuclear Forces. He is a professor of management and political science at Yale University, and was previously a member of the senior staff of the Hudson Institute under Herman Kahn and a consultant to the Rand Corporation. He serves on several Department of Defense advisory boards and works with global multinational corporations on strategy and technology issues. He lives in Connecticut.

“Mr. Bracken's view is a powerful one. . . . The questions [he] raises about the sustainability of current American foreign policy thinking are particularly timely. Nuclear strategy must come out of its post-Cold War retirement. We are once again in a world where nuclear weapons count.” —Walter Russell Mead, The Wall Street Journal

“Penetrating. . . . Bracken is an example of why fresh and fearless thinking is required when considering the near-term future of geopolitics. . . . Everyone interested in nuclear proliferation in the Middle East should read [this book].” —Robert D. Kaplan, Stratfor, author of The Revenge of Geography

“This is an important book, necessary reading for anyone looking to understand nuclear weapons and how they might be used, directly or indirectly, in future conflicts around the world. Paul Bracken is a rigorous critic, convincing and unsentimental in his discussion of the strategic and political context of the subject. This is no simplistic vision of Armageddon.” —George Friedman, author of The Next 100 Years, CEO of Stratfor

“Paul Bracken has written an alarming and compelling wake-up call. He argues that as new countries acquire nuclear capabilities, the cold war rules of the road no longer apply and we ignore the complexities of today’s environment at our peril. He provides an instructive history of how we got here and is practical and provocative in recommending possible solutions.

Read this book. We should not wait for the first nuclear crisis of this century to start thinking about what to do differently.” —Admiral Mike Mullen, USN (ret.), former chairman of the Joint Chiefs of Staff

“Challenging the vision of a world free of nuclear weapons, Paul Bracken argues that we have already entered a second nuclear weapons age -- and that the United States needs to face that reality. His book is well worth reading.” —Graham Allison, director, Belfer Center for Science and International Affairs, Harvard University, and author of Essence of Decision and Nuclear Terrorism

“Put Paul Bracken in charge of our nuclear policy for the twenty-first century. The Second Nuclear Age is a superb analysis of why and how a continuation of our Cold War nuclear forces and doctrines will fail, and how we can make them safer and far more strategically useful.” —R. James Woolsey, Former Director of Central Intelligence

“In this book--which could hardly be more timely--Paul Bracken dissects the dangerous and often neglected realities of 'the second nuclear age' and argues for bold, innovative, and often provocative ways to think about how to avert those dangers. Precisely because he challenges orthodox doctrines and practices and argues forcefully for his own strong views, he helps ensure that one of the most important, complex, and controversial issues of our time will get the hard-headed attention it deserves.” —Strobe Talbott, president of the Brookings Institution and former U.S. deputy secretary of state