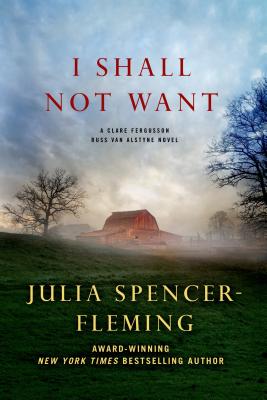 By Julia Spencer-Fleming
$18.99
UNAVAILABLE-Possible Reasons: Backordered, Out-of-Stock, or Out-of-Print (But email us to search for a copy.)

This is book number 6 in the Fergusson/Van Alstyne Mysteries series.

People die. Marriages fail. In the small Adirondack town of Millers Kill, New York, however, life doesn't stop for heartbreak. A brand-new officer in the police department, a breaking-and-entering, and trouble within his own family keep Police Chief Russ Van Alstyne busy enough to ignore the pain of losing his wife---and the woman he loves.

At St. Alban's Episcopal Church, the Reverend Clare Fergusson is trying to keep her vestry, her bishop, and her National Guard superiors happy---all the while denying her own wounded soul.

When a Mexican farmhand stumbles over a Latino man killed with a single shot to the back of his head, Clare is sucked into the investigation through her involvement in the migrant community. The discovery of two more bodies executed in the same way ignites fears that a serial killer is loose in the close-knit community. While the sorrowful spring turns into a scorching summer, Russ is plagued by media hysteria, conflict within his department, and a series of baffling assaults.
As the violence strikes closer and closer to home, an untried officer is tested, a wary migrant worker is tempted, and two would-be lovers who thought they had lost everything must find a way to trust each other again---before it becomes forever, fatally, too late.
Julia Spencer-Fleming shows you can escape danger---but not desire---in her most suspenseful, passionate novel yet, I Shall Not Want.

“Keenly moving and occasionally laugh-out-loud funny, this is a tour de force in a series that seems to have jumped several levels in quality.” —Booklist (starred)

“With each book, Spencer-Fleming just keeps getting better. This one may be her masterpiece, and it will leave the reader wanting more.” —Richmond Times-Dispatch

“If last year's All Mortal Flesh was a shocker, this time Spencer-Fleming has prepared a feast for fans of action-packed crime fiction. Another suspenseful and involving mystery from an outstanding writer.” —Library Journal (starred )