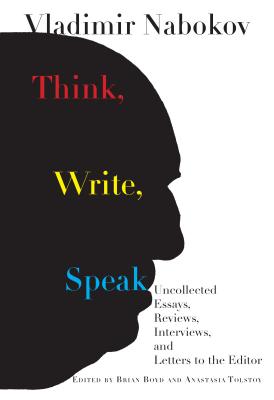 A rich compilation of the previously uncollected Russian and English prose and interviews of one of the twentieth century's greatest writers, edited by Nabokov experts Brian Boyd and Anastasia Tolstoy.

“I think like a genius, I write like a distinguished author, and I speak like a child": so Vladimir Nabokov famously wrote in the introduction to his volume of selected prose, Strong Opinions. Think, Write, Speak follows up where that volume left off, with a rich compilation of his uncollected prose and interviews, from a 1921 essay about Cambridge to two final interviews in 1977. The chronological order allows us to watch the Cambridge student and the fledgling Berlin reviewer and poet turn into the acclaimed Paris émigré novelist whose stature brought him to teach in America, where his international success exploded with Lolita and propelled him back to Europe. Whether his subject is Proust or Pushkin, the sport of boxing or the privileges of democracy, Nabokov’s supreme individuality, his keen wit, and his alertness to the details of life illuminate the page.

VLADIMIR NABOKOV studied at Cambridge University, then lived in Berlin and Paris, writing in Russian under the pseudonym Sirin. In 1940, he moved to America, where he taught at Stanford, Wellesley, Cornell, and Harvard, and wrote some of his greatest works, including Speak, Memory; Lolita; and Pnin. In 1959, he returned to Europe, where he wrote Pale Fire and Ada. He died in Montreux, Switzerland, in 1977.

BRIAN BOYD, University Distinguished Professor of English, University of Auckland, has published on literature, art, philosophy, anthropology, and psychology, but most of all on Vladimir Nabokov, as annotator, bibliographer, biographer, critic, editor, and translator. His work has won awards on four continents.

ANASTASIA TOLSTOY is a junior research fellow at Wolfson College, University of Oxford, where she completed a DPhil on Vladimir Nabokov. She is the co-translator, with Thomas Karshan, of Nabokov's neo-Shakespearean blank verse drama The Tragedy of Mister Morn.

“A fuller, and maybe truer, image of Nabokov . . . The greatest pleasure in reading this book is the impression you get that you’re opening your presents underneath the Christmas tree . . . Boyd and Tolstoy put together an amazing variety of tidbits in their volume . . . A lovely blend of literary elements and of personal details pertaining to Nabokov: you experience intellectual marvel when you detect the premises of a famous quote or a literary pattern, and you feel particular pleasure when you get a glimpse of the man hiding behind the famous writer and becoming suddenly relatable." —Julie Loison-Charles, Transatlantica

“Immense fun . . . Any sensitive reader will linger over the beautiful sentences with which Nabokov enriches even his most casual prose.” —Michael Dirda, The Washington Post

“A must-read . . .  Nabokov notices (and is often amused by) everything . . . He is forever smart and associative, satisfying from the smallest bit to the largest chunk . . . Boyd and Tolstoy have brought out a volume that no Nabokov fan can overlook. We have before us a genius scrambling to patch together a living in the volume’s early years, then a genius living with, and mostly reveling in, the fame he earned.” —Catherine Holmes, The Post and Courier

“Gives us a window into the earlier decades of Nabokov’s life . . . This new collection is an expansive record of Nabokov’s worldview and aesthetic philosophy, but one particularly fascinating element of Think, Write, Speak is the insight it gives us into how Nabokov, staunchly opposed to the politicization of literature, navigated being a public explainer of Russian arts and letters in the midst of the Cold War.” —Jennifer Wilson, The New Republic

“Nabokov is Nabokov. He dispenses gleaming shards . . . The best passage in Think, Write, Speak [is] one that, were I a tattoo person, I would consider advertising on my forearm.” —Dwight Garner, The New York Times Book Review

“Every interview Nabokov granted was a defense, not only of himself against charges of scandal and obscenity, but also of art, the imagination, and literature itself. He devoted his life to the shiver in the spine that passes from writer to reader, and it’s there that he lives on.” —Christian Lorentzen, Financial Times

“Vladimir Nabokov’s opinions . . . are of compelling interest because—paradoxically—he regularly and accurately insisted that his novels sent no message, made no moral case, presented no argument. The beauty and fascination of his views on literary and other matters rest, I think, on his openness to laughter. . . . Nabokov had a lot to laugh about.” —Philip Hensher, The Spectator

“For those of us who are Vladimir Nabokov completists perhaps we finally have closure . . . Now we have the full Nabokovian ex cathedra pronouncements in all their typical vim and vigour, to be relished all the more because Nabokov insisted on writing the replies to all questions posed.” —William Boyd, The Times Literary Supplement (Best Books of the Year 2019)

“Scores of interviews reveal Nabokov’s sly wit and powerful opinions . . . An informative introduction places the selections in the context of Nabokov’s life and writing career . . . A treat for Nabokov admirers.” —Kirkus Reviews