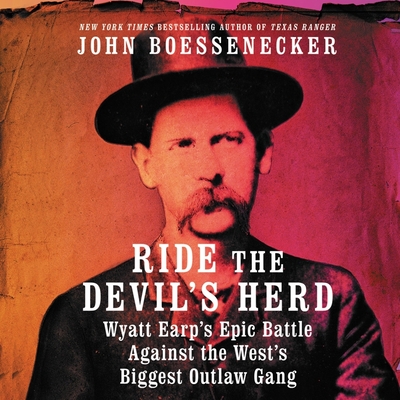 By John Boessenecker, Stephen Graybill (Read by)
$39.99
UNAVAILABLE-Possible Reasons: Backordered, Out-of-Stock, or Out-of-Print (But email us to search for a copy.)

Wyatt Earp is regarded as the most famous lawman of the Old West, best known for his role in the Gunfight at the O.K. Corral in Tombstone, Arizona. But the story of his two-year war with a band of outlaws known as the Cowboys has never been told in full.The Cowboys were the largest outlaw gang in the history of the American West. After battles with the law in Texas and New Mexico, they shifted their operations to Arizona. There, led by Curly Bill Brocius, they ruled the border, robbing, rustling, smuggling and killing with impunity until they made the fatal mistake of tangling with the Earp brothers.Drawing on groundbreaking research into territorial and federal government records, John Boessenecker's Ride the Devil's Herd reveals this long-forgotten chapter of Wild West history.