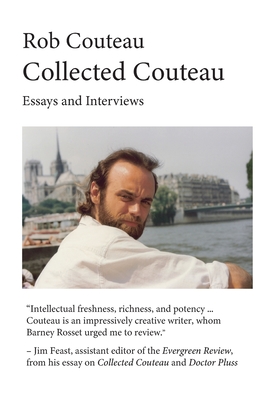 Collected Couteau features an anthology the author's early writings and publications. It contains the only complete, unabridged versions of interviews with Ray Bradbury and Last Exit to Brooklyn author Hubert Selby. The 188-page trade-sized paperback also features an unabridged interview with Paul Bowles's biographer Christopher Sawyer-Lau anno, in which the latter discusses Paul Bowles, Allen Ginsberg, William Burroughs, Louis-Ferdinand C line, and the Beats. The collection includes an essay on Walt Whitman and numerous book reviews, including essays on Tea in the Harem, by Mehdi Charef; The Demon and The Room, by Hubert Selby; Libra, by Don DeLillo; Love in the Time of Cholera, by Gabriel Garcia Marquez; The Mustache, by Emmanuel Carr re; A Literate Passion: The Letters of Anais Nin and Henry Miller, and a review of Allen Ginsberg's 1990 photography show in Paris. It also contains an in-depth review of Carl Jung: Wounded Healer of the Soul, by Claire Dunne; and Jung, My Mother and I. The Analytic Diaries of Catherine Rush Cabot, by Jane Cabot Reid.