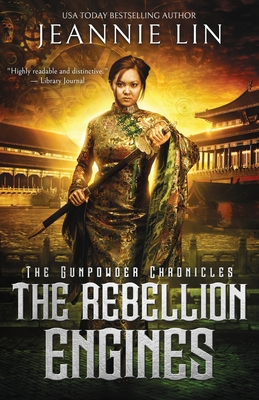 War looms on the horizon. Can a young woman caught between family and country keep her loved ones alive?

China, 1853. Jin Soling's divided loyalties rest on a knife's edge. Paired with Chen Chang-wei, her former betrothed, Soling works as a physician in a secret factory building automatons to march on the empire's battleground cities. Though Soling and Chang-wei's bond has grown stronger, the strain of serving a country in turmoil threatens to tear them apart.

From a dangerous smuggling run in pirate-infested waters to a dramatic confrontation in the winding streets of Shanghai, Soling learns that the greatest danger might not come from foreign invaders, but from forces inside their borders.

Will Soling sacrifice her life and love to an empire that has forgotten its own people?

The Rebellion Engines is the mind-blowing conclusion to the Gunpowder Chronicles steampunk fantasy trilogy.